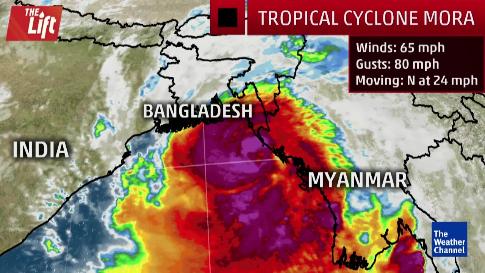 Things you should know about the cyclone:

Officials in Chittagong reported winds gusting up to 135 kph (85 mph), and said low-lying coastal areas were flooded by a storm surge with waves 2 metres (7 feet) high.
The country’s (Bangladesh) two main seaports in Chittagong and Mongla have suspended container handling, and river transports across Bangladesh have been suspended, reported the CNN.
The Indian Navy on Monday had said that it has kept its Eastern Fleet ships at the highest level of readiness to render assistance to Bangladesh if required.
The cyclone was expected to weaken in Bangladesh by late morning as it moved inland towards India where authorities have warned of heavy rain in the northeastern states of Tripura, Mizoram, Manipur, Nagaland and Arunachal Pradesh.
The Mizoram government has issued a warning and has advised people to take precautions and preventive measures as it is expected that the cyclone could cause landslides and floods.
The cyclone formed after monsoon rains triggered floods and landslides in Sri Lanka, off India’s southern tip, which have killed at least 180 people in recent days.
Also Read :   Sex and the City 3 not a 'pipe dream', Kristin Davis says

In the eastern Indian state of Bihar, 24 people have been killed in recent days, either by lightning or in collapsed dwellings.