New Galaxy Note is designed to help you achieve more in work and life with an Infinity Display, enhanced S Pen and Dual Camera with dual Optical Image Stabilization

Samsung Electronics today launched its flagship smartphone Galaxy Note8 in India, offering the next level Note for people who want to do bigger things. Samsung will also introduce Bixby Voice capabilities with ‘Make for India’ innovations in its intelligent interface Bixby in the next few weeks. Bixby will be available on Galaxy Note8 and Galaxy S8 & S8+ devices. 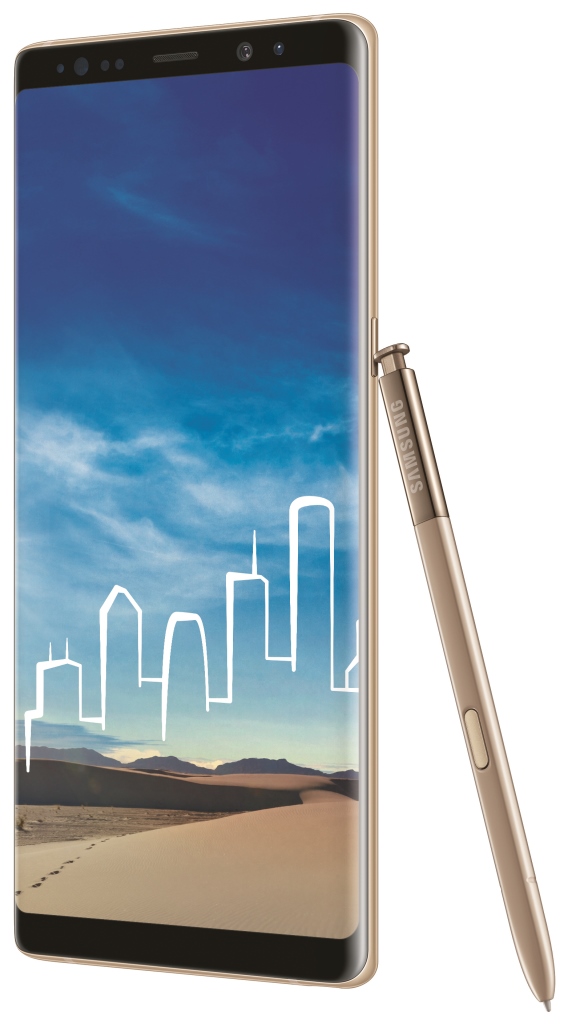 With Galaxy Note8, consumers get a big, immersive Infinity Display that fits comfortably in one hand,
S Pen to communicate in more personal ways, and Samsung’s best-ever true Dual Camera with dual Optical Image Stabilization (OIS) to capture stunning photos in all conditions.

The incredible Note series loved by millions of consumers in India will also come with the revolutionary mobile payment service, Samsung Pay, and Samsung’s defense-grade security platform Samsung Knox, making it the most desirable smartphone available in the market. Galaxy Note8 is designed for the way consumers lead their lives and lean on technology today.

Mr. HC Hong, President and CEO, Samsung Southwest Asia, said, “India loves the Galaxy Note for the infinite possibilities it offers with its big screen, unique S Pen and multi-tasking capabilities. I take this opportunity to thank all our consumers in India who have made Samsung the Most Trusted Brand, especially those who have patiently waited for their next Note. This time, we have made the Galaxy Note8 bigger and better and added ‘Make for India’ innovations that will transform lives yet again. Galaxy Note8 lets people do things they never thought were possible.” 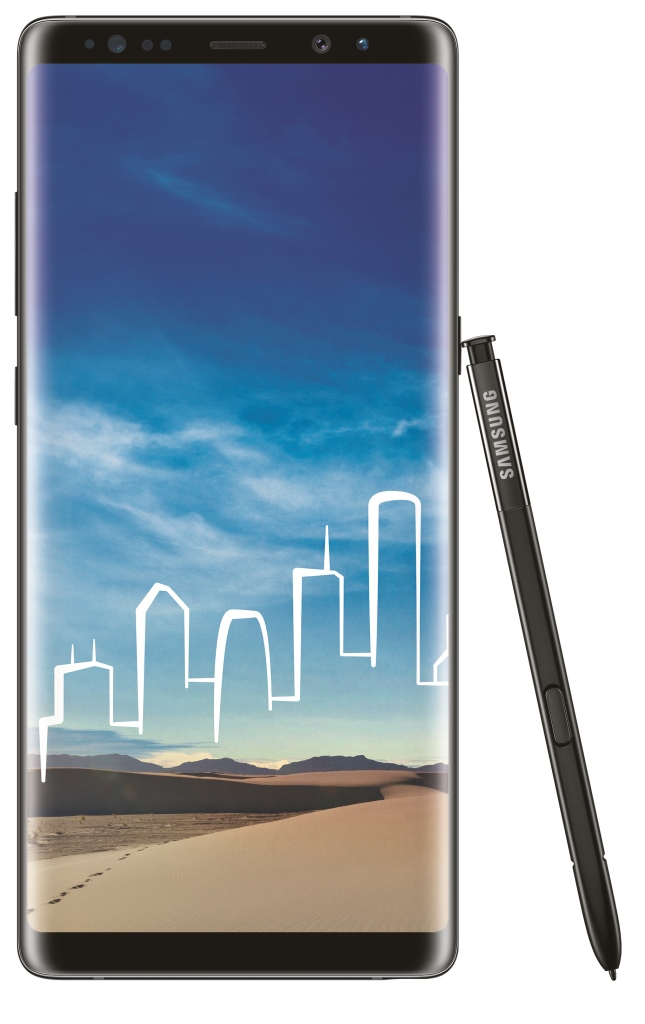 “Galaxy Note8 with its stunning Infinity Display, enhanced S Pen and a true Dual Camera, is designed for those who want to do bigger things. At Samsung, we listen to our consumers and bring in meaningful innovations that help make their lives better. With this launch, Samsung will further consolidate its leadership in the premium smartphone segment in India,” said Mr. Asim Warsi, Senior Vice President, Mobile Business, Samsung India.

Samsung pioneered a new category of smartphones with the Galaxy Note launch in 2011. Since then, a community of enthusiasts emerged through their affinity for Note’s signature expansive screen and
S Pen. According to Samsung market research1, 87% of Note users say they are satisfied with their Galaxy Note and 82% may recommend it to friends.

See More, Do More on the Infinity Display

Galaxy Note8 has the biggest screen ever on a Note device, yet with superior engineering and design, it comfortably fits in one hand. The 6.3-inch Quad HD+ Super AMOLED Infinity Display lets you see more and scroll less. Galaxy Note8 gives you more room to watch, read and draw—making it the ultimate multitasking smartphone. 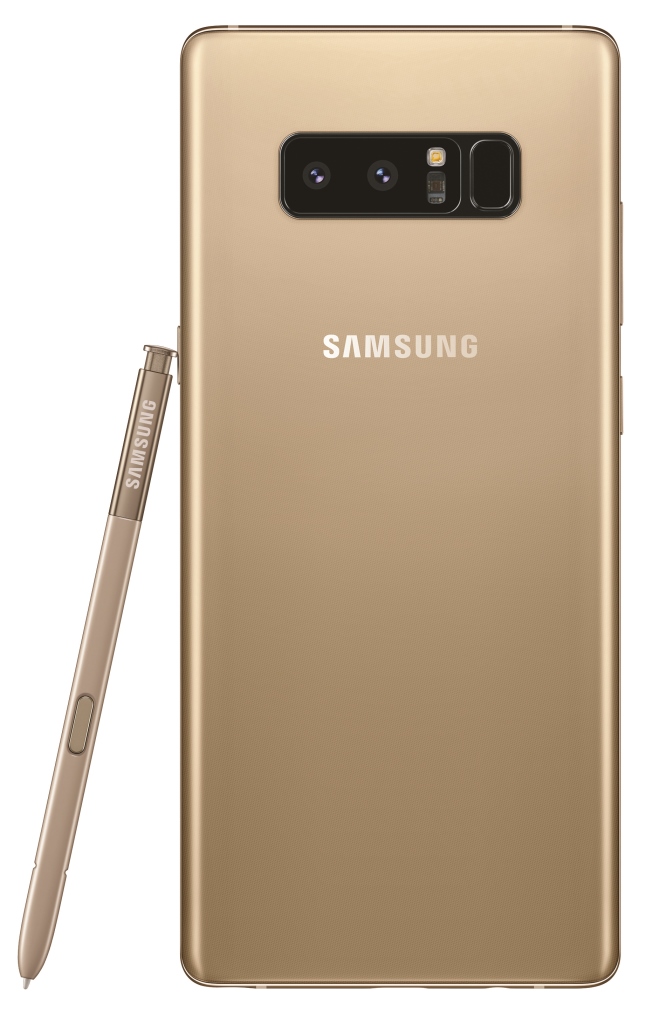 Note users have long been able to do more with Multi Window. With Galaxy Note8, the App Pair feature lets you create a custom shortcut on the Edge Panel to simultaneously launch two frequently used apps and invoke them with ease. So, they can watch a video while messaging friends or dial into a conference call with the number and agenda in front of them2.

Since its introduction, the S Pen has been one of the Note’s defining features. With Galaxy Note8, the intelligent S Pen unlocks entirely new ways to write, draw, and interact with the phone and communicate with friends. It has a finer tip, improved pressure sensitivity3, and features that enable users to express themselves in ways that no other stylus or smartphone ever has.

Live Message on Galaxy Note8 allows you to tell expressive stories and you can now share animated texts or drawings across platforms that support GIFs4. It’s a whole new way to communicate with the
S Pen—adding lively and emotional connections that bring your messages to life.

The Always On Display allows Galaxy users to stay on top of their notifications without unlocking their phone. And with Galaxy Note8, it’s even more powerful.

Galaxy Note8’s Screen off memo allows you to take up to one-hundred pages of notes, without even unlocking the phone. Users just need to remove the S Pen and jot down notes, pin them to the Always On Display and edit directly from the Always On Display, letting users, including professionals, do what other smartphones can’t.

The improved S Pen acts as a personal translator and convertor—just hover over text to quickly translate not only individual words, but entire sentences and get the output in up to 71 languages, or instantly convert units and foreign currencies.

The rear camera on Galaxy Note8 comes with two 12MP lenses—wide angle and telephoto—and both are equipped with Optical Image Stabilization (OIS) for sharper photos and videos—an industry first feature.

For more advanced photo-taking, the Galaxy Note8’s Live Focus feature lets you control the depth of field by allowing you to adjust the bokeh effect in preview mode and even after you take the photo.

In Dual Capture mode, both rear cameras take pictures simultaneously—one close-up shot from the telephoto lens and one wide-angle shot that shows the entire background.

The wide-angle lens continues the legacy of the Dual Pixel sensor with rapid Auto Focus so you can capture sharper, clearer shots even in low-light environments. Galaxy Note8 is also equipped with an industry-leading 8MP Smart Auto Focus front-facing camera for sharp selfies and video chats.

Galaxy Note8 packs in enhanced performance and features that have redefined the mobile experience:

Also Read :   Sangat basks in the glory of Guru Sahibans’ relics, many eyes get moistened

Galaxy Note8 will be offered to consumers at a price of INR 67,900 and will be available in India starting September 21, 2017 in Midnight Black and Maple Gold colours. The device will be available for pre-booking from September 12, 2017 across selected retail stores and also online exclusively on Samsung Shop and Amazon.in.

Samsung also announced an all new ‘Samsung Upgrade’ program offering its loyal Galaxy users the best value when they trade in their old device for the Galaxy Note8. The program offers a convenient solution through My Galaxy app—a Samsung Make for India feature and is powered by Cashify.

Galaxy Note8 users will get a Double Data offer on Jio, under which they can get up to 448 GB  of extra 4G data over 8 months, as well as complimentary Jio Prime Membership. With these offers Samsung Galaxy Note8 users can experience a truly unconstrained Digital Life on Jio’s world-class all-IP data strong only-4G network.

In another special launch offer, consumers who purchase their Galaxy Note8 using an HDFC Credit Card will get a cashback of INR 4,000.