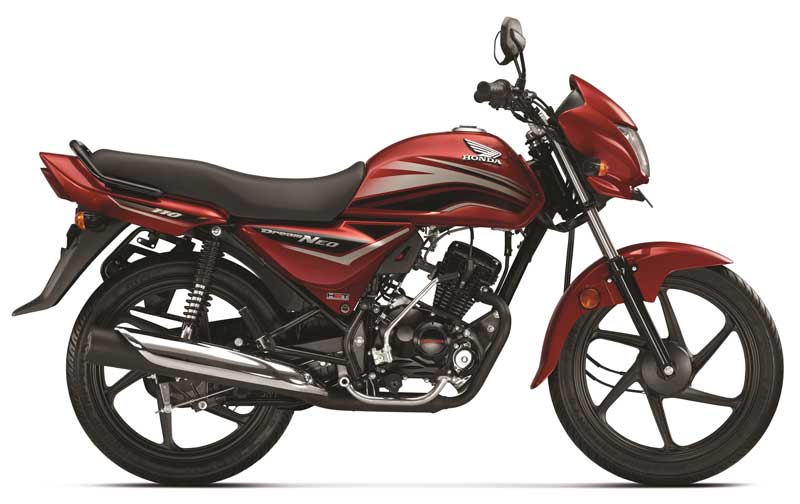 Honda launched the 110cc Dream Neo motorcycle in 2013. To delight customers more, Honda has refreshed the Dream Neo with a new dose of style and premium looks.

Giving a fresh appeal to Dream Neo are the new graphics and 3 new colours – Black with Blue Stripes, Imperial Red Metallic and Geny Grey Metallic; besides the existing Black with Red Stripes.

Lending the Dream Neo a unique premium character are the newly added chrome plated muffler protector and 3D emblem on the fuel tank.

Complementing the stylish upgrade is the revolutionary HET engine which has proven its mettle over the years with its best-in-class performance and delivers an astonishing fuel efficiency of 74kmpl. (Mileage based on internal Honda test ride mode that is close to actual city riding conditions).

Retaining the customer-centric focus of Honda 2Wheelers, the value additions on Dream Neo come at no additional cost. Dream Neo continues to be strategically priced at Rs 49,070 (Ex-showroom, New Delhi).

The success and reliability of Dream Neo received a further validation when it received the Best Economy Motorcycle in Initial Quality at the prestigious J.D. Power Awards Ceremony 2015/ 16.

Both studies based on evaluations from 9,283 vehicle owners who purchased a new vehicle between March 2015 and October 2015. The study includes 87 two-wheeler models from ten makes.