DVET has published first round allotment and the candidates can check their respective allotments through Candidate Login. Admission Confirmation starts on 28th July from 10 am onwards and shall close on 31st July 2017 at 5 pm at the respective ITIs. 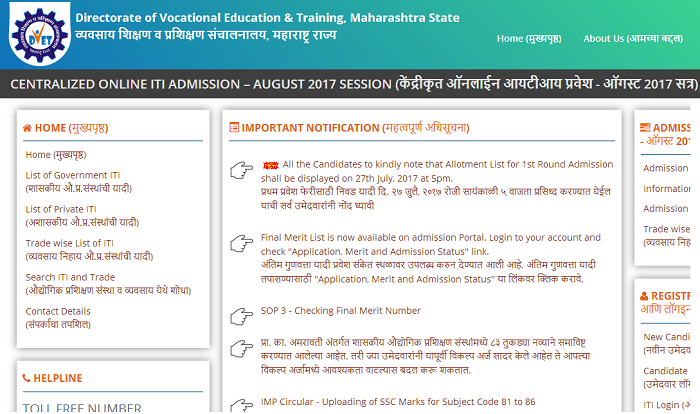 ITI admission list for the first round of seat allotment across ITI colleges in Maharashtra will be published today. The Directorate of Vocational Education & Training (DVET) Maharashtra had already published ITI merit list and now the 1st allotment list for admissions in Industrial Training Institutes will be published today. The official update from DVET says that Allotment list for 1st round Admission shall be displayed on 27th July, 2017 at 5 pm. The students will have to login through Candidate Login on admission.dvet.gov.in.

DVET Maharashtra had intially published the provisional merit list for ITI admissions on July 11, after which the students were instructed to check their details and report for inaccuracy in the details. After considering the representations from the students, DVET published the final ITI merit list on July 15. The admission schedule has been revised by the DVET and now the first ITI admission list or allotment list is scheduled to be published today.

DVET is holding Centralized Admission process for Vocational ITI courses across the Amravati, Aurangabad, Nagpur, Nashik, Pune and Mumbai. The DVET is organizing the Central Admission Process for total 1,33,084 seats in 79 trades which are offered by the 147 government and 496 private ITIs. As per the reports, around 3.10 lakh students have applied for ITI admissions this year, which is double the number of seats available.

Also Read :   How Did eCommerce Perform During The Festive Season 2021

The admissions in ITI colleges in Maharashtra will be done in five rounds as the students will be allotted colleges based on their merit. The students can follow the latest updates on ITI admissions at admission.dvet.gov.in.

Imran threatens to spill secrets if ignored by establishment