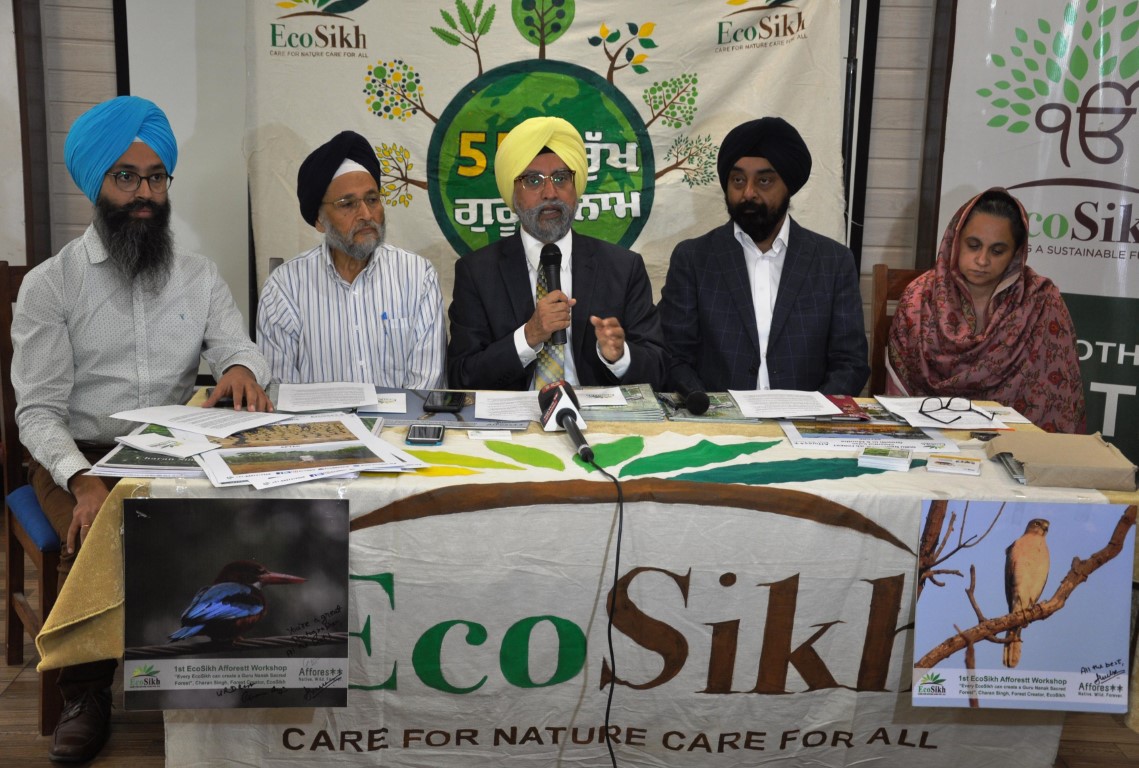 This initiative is being implemented under the ‘Guru Nanak Sacred Forest Project’ which was announced by EcoSikh in Mar, 2019. It is noteworthy that last year, under the ‘Guru Nanak 550 Campaign’, EcoSikh had announced the goal to plant 1 million trees all over the world including Punjab and other parts of India to celebrate the 550th birth anniversary of the first Guru.

Dr. Rajwant Singh, Global President of EcoSikh, said, “EcoSikh had initiated the idea of planting 550 trees at 1820 locations in the name of Guru Nanak to reach the goal of 1 million and we are thrilled with the response of the community from all across the world. Communities in India, Canada, Pakistan, Australia, USA, Myanmar, and the UK have already planted 550 trees in their respective countries as a part of celebrations. EcoSikh Canada is planting 10,000 trees by this November. ”

“Sikhs have set a new tradition of celebrating gurpurab meaningfully by caring for the ecology by following the environmental teachings of Guru Nanak who had said ‘Air is a teacher, water the father and earth is the mother’. This act will leave positive footprints for generations to come.” Added Dr. Rajwant Singh.

He further stated, “Guru Nanak Sacred Forests have attracted biodiversity and have added the fertility of the soil as well as improving the water table. It is a win-win situation for the earth and all living beings including humans. The growth in these forests is phenomenal. We are confident that if we plant forests in every available piece of land in rural or urban areas, we can reverse the degradation of environment in Punjab and India.”

EcoSikh Sacred Forest Convener, Charan Singh from Mumbai claimed, “EcoSikh with the support of Shubhendu Sharma of Afforestt have trained forest creators to plant over 30,000 surviving trees in 58 Guru Nanak Sacred Forests spread across Punjab, Haryana, Chandigarh, Rajasthan, Gujarat, J&K, Maharashtra and also in Kasur, Pakistan. Many more volunteers are being empowered to create these Sacred Forests to fulfill our mission of 1 million surviving trees and to establish their belief system that, Every EcoSikh can create a Guru Nanak Sacred Forest. EcoSikh has firmly embarked on the journey to bring in Punjab’s ever green revolution.“

Supreet Kaur, EcoSikh President India shared, “I am amazed by this experience, a journey that started here 7 months back has turned into a revolution in Punjab. The GNSF in Chanarthal has grown so dense in 4 months that one cannot even enter for de-weeding. The power of Punjab’s soil  is miraculous, we need to all work together to create GNSF in every open public space in our cities and also in each of our villages.”

EcoSikh Project Manager, Ravneet Singh mentioned, “Our sacred forests grow 10 times faster and they are 30 times denser than the normal plantation, hence they produce 30 times more oxygen. So far we have planted 51 native species in Punjab which include some rare species like karir, peelhu, roheda, jhand, malhe beri, lasoora, falsa etc. The number of species will increase in the coming years and these sacred forests will become the biodiversity seed banks of Punjab. What’s more, these forests can also be planted in winter season.”

In addition, for the very first time, EcoSikh has created a unique garden of the trees mentioned in the Sikh scriptures and it is called Guru Nanak Bagh. This garden is located at Patto Hira Singh, Moga and it will showcase various species of trees and shrubs with the Gurbani quotes.

EcoSikh was formed in 2009 in collaboration with the United Nations Development Programme (UNDP) and the organisation is marking the 10 years of faithful steps to restore the ecology and it has engaged the youth and many communities to take green action.

EcoSikh, in collaboration with Afforest, has trained a team of 17 forest makers in Punjab and Jammu Kashmir in the recent months who execute the plantation by specific Miyawaki methodology of planting forests of 550 trees in 200 square yards. It has also partnered with religious, social and governmental organizations to implement this agenda.

Also Read :   COCA-COLA ZERO – ONE OF THE COCA-COLA COMPANY’S MOST SUCCESSFUL AND SIGNIFICANT INNOVATIONS – NOW IN INDIA

National Award for the Regional Microbrewery for Brew Estate