Taking forward their legacy of environment conservation, Washington based non-profit organisation EcoSikh , released a Punjabi song ‘Kudrat’, on the urgent need of environment protection, &  to coincide with celebrations of the Sikh Environment Day(SED), which is to be marked on March 14. 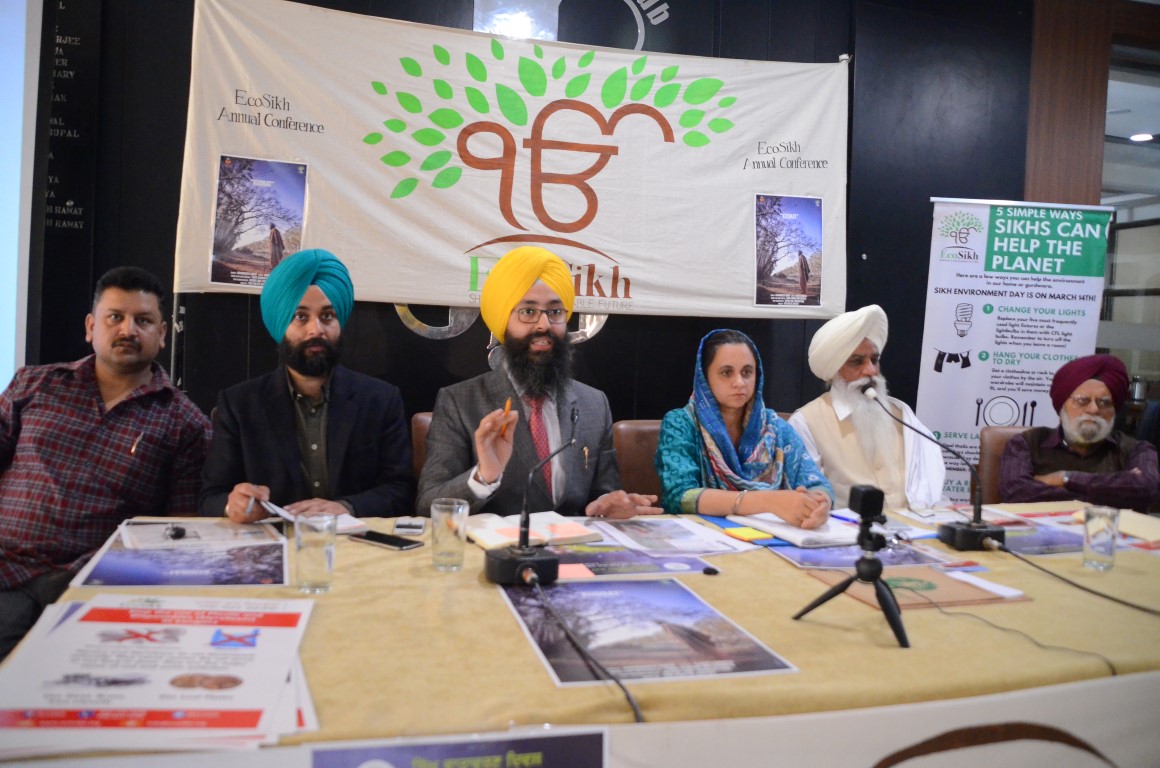 The audio video of the song made by young EcoSikh activists, which very effectively gives the message of how humans have created an environmental time bomb, which can go off anytime, was also shown to media. Since 2010, EcoSikh has facilitated the celebration of the Sikh Environment Day marking the Gurgaddi Diwas (Enthronement day) of Guru Har Rai, who became the 7th Sikh Guru in 1644. He is known in history to have a deep sensitivity for nature & animals and had asked his followers to care for the environment.

EcoSikh held a press conference to elaborate on how it will be celebrating SED & to talk about the Environmental issues connected to Punjab, to be addressed during the celebration. Ravneet Singh- EcoSikh Project Manager, Supreet Kaur- EcoSikh President, Jaspreet Singh from EcoSikh Board along with ‘Kudrat’s’ singer- Harminder Singh, lyricist- Karn Lahoriya and various environmentalists like Manjit Singh from Ganga Nursery, Nikhil Sanger – Founder President of Wildlife Conservation Society, Nawanshahr and Harkirat Singh- Managing Trustee, Satnam Sarv Kalyan Trust were present. It was revealed that this year as many as 18 countries will be marking SED celebrations.

The panellists  shared startling statistics which point that Punjab is on the verge of an environment disaster. Four major cities of Punjab have been included in World’s Top 25 Most Polluted Cities with nine lakh trees being chopped in a short time span of 2011 to 2016. The state is left with just 3.80% forest area. The unnecessary production of tube wells has lead to water level depletion at a rate of 3 feet per year & 102 agricultural development blocks out of 141 in the state, now fall in the dark zone, where the underground water level is 200 feet or more. 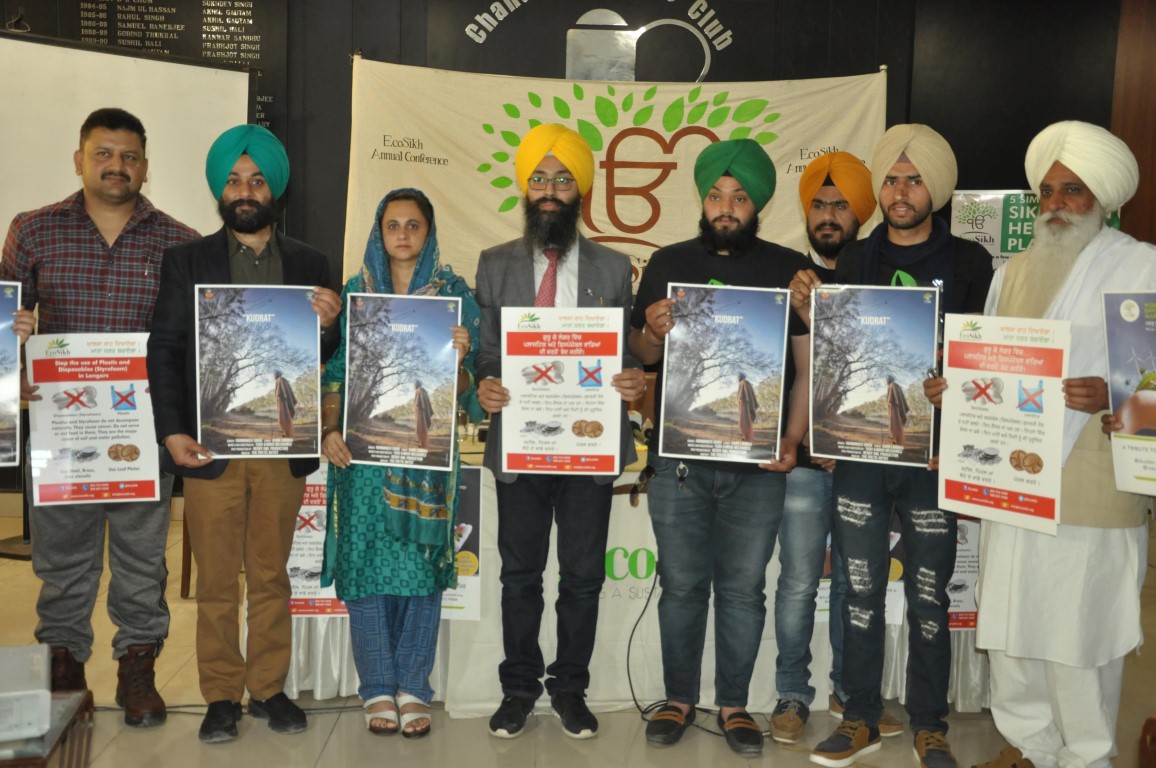 Moreover, there has not been a proper way to ensure the treatment of industrial waste before dumping it into rivers and one can very well imagine the environment with 4300 tons of garbage produced everyday with such poor garbage management facilities. This environmental degradation has resulted in spread of fatal diseases in the state. An average of 20 cases onfcancer are being registered in Punjab daily.

EcoSikh Project Manager, Ravneet Singh, said, “This grave environment situation in Punjab is the motivation for initiatives during the SED. As a part of our SED campaign, activists will be planting trees, doing seminars on saving water, organising-katha kirtan diwan to spread awareness about environment protection, holding cycle rallies, organising displays of organic kitchen gardens, flower shows, setting up of no vehicle zones etc.” Adds Ravneet, “ EcoSikh is calling upon the state government, Gurdwaras, academic institutions and NGOs to focus on plantation and make sure that these trees survive and to ban Styrofoam in government bodies and especially for langars in the Gurdwaras.”

Mentioning about the measures which can be taken to improve the situation, Supreet Kaur, President EcoSikh said, “Our first priority is to impress upon government to ensure that a well planned strategy is put in place to increase the forest area in the state. Second priority is  to create awareness among farmers and masses to conserve water and to ensure that industrial waste is treated before being dumped in the rivers.”

EcoSikh activist & ‘Kudrat’ singer , Harminder Singh, said, “We were so deeply saddened by Punjab’s environmental degradation that we wrote lines of song ‘Kudrat’ right from our heart. The song talks about the environmental crisis and the continuously changing climate conditions. It is an effort to spread awareness among people to adopt a pro active strategy against Global warming & garbage disposal.  Adds lyricist, Karn Lahoriya,”The song gives the message that if we do not value mother nature now we will have to repent one day. All aspects of the song like lyrics, music, video production etc have been done by EcoSikh activists.”

Dr. Rajwant Singh, EcoSikh Global president, said,” EcoSikh is continuously striving to engage the Sikh Community not just in Punjab & India but even worldwide to spread the message of the Sikh Gurus. We will be renewing our appeal  to all Gurdwaras and Sikh institutions to increase the consumption of organically grown food in Langars which will certainly nudge the small farmers to switch to healthier agricultural practices.”

Environmentalists also shared their work experiences and findings which focused on issues like revival of gardens in Gurudwaras, banning of plastic and disposable styrofoam in the Gurdwaras, marriages and festivals and the need to promote organic agriculture. Wildlife conservationist Nikhil Sanger said, “The wildlife is disturbed by plastic and every year the Holla Mohalla increases the intensity of garbage in the jungles of Ropar. So plastic needs to be banned.” Prominent Sikh environmentalist Manjit Singh of Ganga Nursery, appealed to people to realise the gravity of situation by saying, “ For thousands of years, we have been taking continuously from Mother earth. It is high time we should pay her debt.” Harkirat Singh, Trustee of Satnam Sarv Kalyan Trust, which has done extensive job in tree plantation also emphasised on the timely conservation of earth in his “We have already done an irreparable loss to environment. Even if we realise the scenario now, we can think of saving Earth.”

Stated EcoSikh Board Member, Jaspreet Singh, “The sustainable industrial growth of Punjab is essential, so under EcoSikh initiative Guru Har Rai Rukh Lagao Leher 2017, we have created a three layer green zone in Focal Point Ludhiana, we shall continue to address the air issues in future.”

In the past years of EcoSikh has got planted hundreds of trees by the Gurdwaras and educational institutions, and over 2000 trees have been planted by EcoSikh itself in Amritsar. In the near & long term future EcoSikh will focus on the tree plantation along with youth workshops to train young leaders on environmental issues in Punjab.