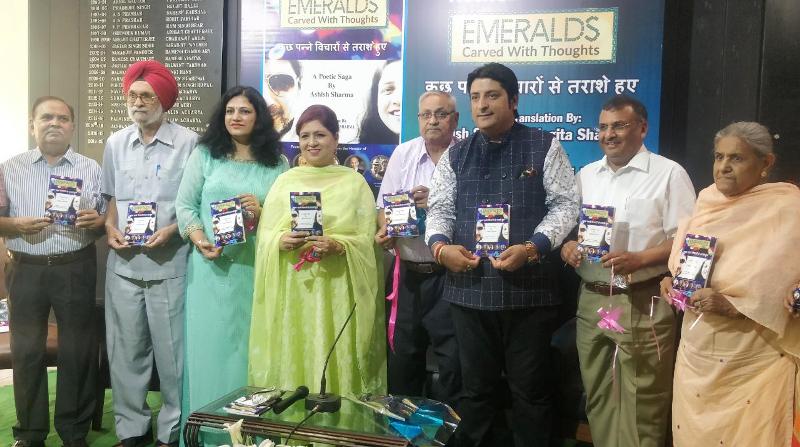 The event was graced by Dr.Harjit Singh – a noted punjabi poet, Dr.Gurwinder Aman – a noted punjabi short story writer, Mr.Harish Agarwal, Ms Harjinder Kaur Noted Punjabi poet ,. Ms Savita Bhatti read excerpts from it.
Poetic Saga is a unique collection of Hindi Poems with English translations for everyone to read & enjoy. Poetic saga which is a perfect blend of profound and common events of everyday life will be relevant to each and every reader irrespective of their age and location.
They are inspired by day-to-day events and occurrences in the world and from author’s life. The Poetic Saga expresses poet’s thoughts about social evils and issues, environment, relationships, happiness and hope, all in the form of poetry.
The book has some poems written in the honour of some great personalities like Prime Minister Narendra Modi, Former Prime Minister Late Atal Bihari Vajpayee, The King of Meaningful Comedy Late Shree Jaspal Bhatti, The Great Philanthropist & Business Personality Late Mr.Hayel Saeed Anam (HSA) & Poet’s parents Prof.Harinder Sharma & Uttar Sharma.
The poetic saga also has a poem to commemorate 70 years of friendship of the two great nations – India & Indonesia.  English translation has been done by Yogita Sharma.
This is Ashish’s third Publication. The book has published by BecomeShakespeare.com. His first two books were “Pearls from The Ocean of Heart” – “कुछ मोती दिल के सागर से” – released on 5th July 2014 & “Diamonds from The Mine of Mind” – “कुछ हीरे मन की खान से” – released on 27th June 2015.
Poetry according to Author Ashish Sharma  is one of the most interesting ways of expression. The launch event was held on Wednesday 19 June at Chandigarh Press Club.

Welfare activities are on priority list for the rehab of Jail...