Endometriosis is a condition where the tissue which forms the innermost lining of uterus(womb) grows outside the uterus. This leads to inflammation, adhesions (bands of scar tissue) and scarring of various tissues. These cysts are often referred to as “chocolate cysts,” because they contain a thick brownish fluid, mostly old blood. Endometriosis most commonly involves the pelvic organs ovaries, fallopian tubes and the tissues lining the pelvis. But can occur anywhere in the body like urinary bladder, small and large intestine, ureters (tubes leading from the kidneys to the bladder) etc. The cause of endometriosis is exactly not known. 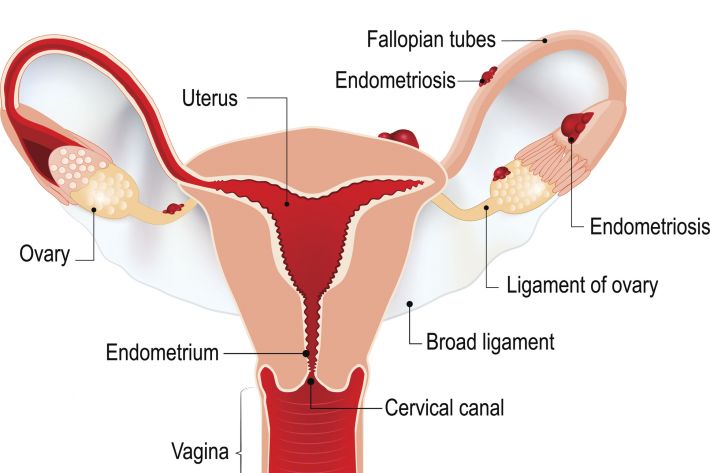 What are the symptoms of endometriosis?

The most common symptom of endometriosis is chronic (long-term) pelvic pain, especially just before and during the menstrual period along with heavy bleeding. In some cases, it can cause pain during sex. Also, it affects the fertility in patients in patients trying to conceive. Inflammation from endometriosis may damage the egg or interfere with their movement through the fallopian tubes and uterus. When intestines or urinary tract is involved it can cause pain with bowel movements or urination. Other symptoms include fatigue, diarrhea, nausea or bloating especially during periods. Many women with endometriosis have no symptoms.

How is endometriosis diagnosed?

Laparoscopy  (a surgery where a doctor looks in the abdomen with a camera) is the gold standard method for diagnosis of endometriosis. Ultrasound can also be done to visualize the pelvic organs or cysts. But this doesn’t definitely tell whether you have endometriosis or not.

How is endometriosis treated?

Treatment for endometriosis depends on the extent of the disease, your symptoms, and whether you want to have children. Medications that are used to treat endometriosis include pain relievers, such as nonsteroidal anti-inflammatory drugs (NSAIDs), and hormonal medications, including birth control pills, progestin-only medications, and gonadotropin-releasing hormone agonists.Surgery can be done when medical measures fail to relieve pain and to improve fertility

After surgery, most women have relief from pain. But depending upon your desire to preserve fertility,surgery can be of the following types-

In severe cases of endometriosis, surgery to remove the uterus and cervix (total laproscopic hysterectomy ) as well as both the ovaries and other endometriotic implants may be the last resort.