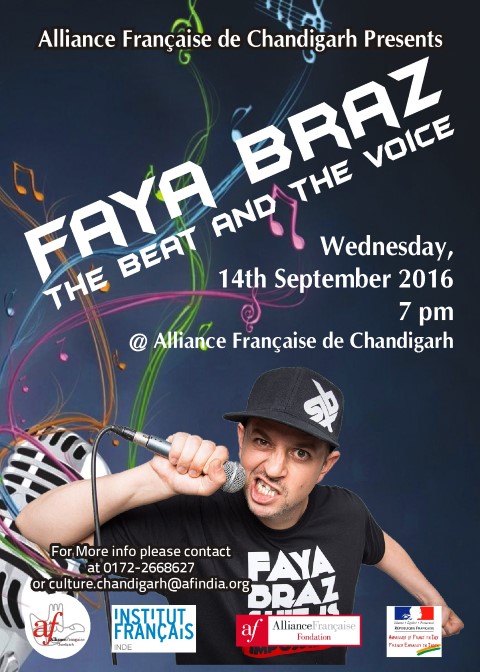 NewZNew (Chandigarh) : All the beatbox lovers, here is the opportunity to witness the LIVE performance by Faya Braz (one of the top loopers in the world) tomorrow in tricity at Alliance Francaise de Chandigarh at 7 p.m. Faya Braz show is a surprising and powerful experience, also a story where everything is however made with an unexpected instrument that everyone owns, “The MOUTH”!

Faya Braz is one of the French main beatboxer and one of the most prolific activists of the beatbox culture. He started beat boxing around 1996. After meeting Mister lips and Micflow in 2003, and Tiko in 2005, the 4 beatboxers decided to build a team in 2007 called “UNDER KONTROL”.

Faya Braz has been a student of History and he say’s that, “Most of the people try to earn their life, but I’m trying to live my Life”. Also adding on to it, he said, that ‘he didn’t chose beat boxing, it just happened to him’.

Faya has been to India a couple of times for his shows in Delhi, Mumbai and Bengaluru and now he visits Chandigarh. He’s a kind of a personality who believes that he’s the one in a generation who broke the law and went for this Complete strange and now, a well recognized talent called the beat boxing as he also says that the beat boxers say their music, they don’t play it.!!

Faya Braz performs Live tomorrow in Chandigarh and expects a huge response from the young and enthusiastic youth of tricity.

National Silk Expo in Chandigarh at Himachal Bhawan from 23 to...

MTV to bring the party to your bloc with 2nd edition...