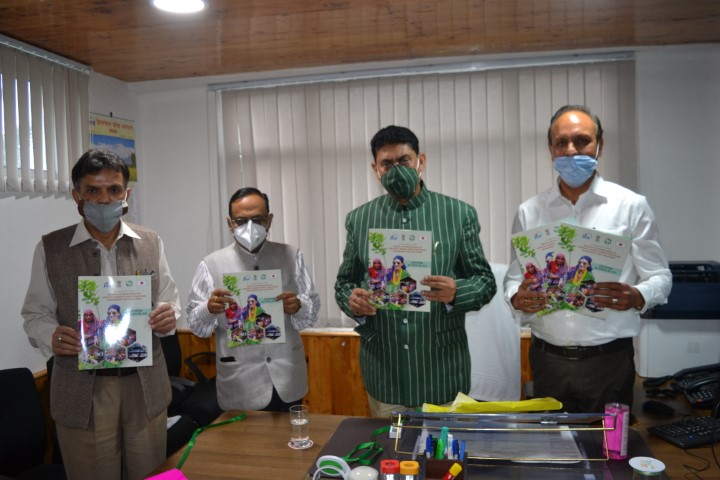 He has said that the equal and active participation of women is a must while moving forward towards increasing green cover and sustainable development of the state.

Rakesh Pathania said this during a discussion with the officials and other staff at the headquarters of the “Project for Improvement of Himachal Pradesh Forest Ecosystems Management and Livelihoods” at Potters Hill, Shimla. This was his first visit to the project headquarters after assuming the charge of Forest Minister. The Rs 800-crore project has been funded by the Japan International Cooperation Agency (JICA). It is being implemented as part of Indo-Japan cooperation.

Appreciating the efforts of the project management initiated so far, the Forest Minister said that he would also visit the project areas and take stock of the activities there. He exhorted the staff to accelerate the pace of project implementation. He said that the target was to increase the green cover of the state from the current 27.2 per cent to 30 per cent by 2030, adding that this project would contribute significantly in achieving this goal.

The Forest Minister said that 61 nurseries of the Forest Department had been strengthened with the support of this project. Due to this, the capacity of the nurseries of the department had increased by 3.5 million plants. He said that saplings would be planted on 1631 hectares of land during this financial year. He further said that in view of the livelihood improvement of the forest dependent communities, they will be allowed to cultivate medicinal and aromatic plants on forest land in addition to the private land.

Turning to the goals and objectives of the project, Rakesh Pathania said that the emphasis will be on sustainable forest ecosystem management and augmentation, biodiversity conservation, livelihood improvement support and institutional capacity building and strengthening under the project. He expressed confidence that this project will prove to be a milestone in the direction of social and economic development and environmental conservation with the active participation of local people, especially women.

The Forest Minister expressed happiness that information technology was being used in the project implementation. He said that establishment of Monitoring and Evaluation Cell at headquarters level was also a good step. He expressed confidence that due to the activities of the project, there will be a reduction in incidents of human-wildlife conflicts and fires in the forests and check on illegal felling and encroachments. Besides, soil erosion will stop, water will be conserved and alternative livelihood opportunities will be created.

Meanwhile, during the meeting, He also interacted with the officers and other staff of the Kullu and Rampur regional offices of the project through video conference. On this occasion, he released three booklets – Communal Development Trainers’ Manual, Gender Action Plan and Micro Planning Guidelines for Field Workers- prepared by the project. He also planted a sapling of “Chinar” in the project premises after the meeting.

Some of the top tips to crack the PMP certification exam...