Over 1.5 lakh illegally printed NCERT school books worth Rs 50 crore were seized in a raid carried out by a joint team of Military Intelligence (MI), Uttar Pradesh Special Task Force (UP STF) and local police at a facility near Kashigaon. 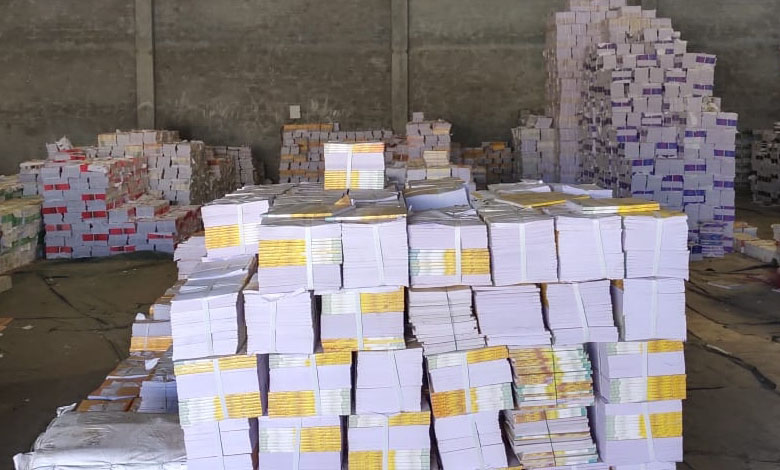 Official sources said that the alleged kingpin, Sachin Gupta, has gone missing after burning similar books in the main factory in Mohkampur Enclave near Sabzi Mandi.

Early this month, the local Military Intelligence officials received input of suspicious activities in a godown near Kashigaon, Achronda Road, under the Partapur police station.

To rule out any possibility of anti-national activities ahead of Independence Day, sleuths of MI carried out discreet surveillance of the facility, sources said.

During the investigation, the MI sleuths learnt that the facility stored large number of illegally printed books of NCERT. The MI shared the input with the local STF of UP Police.

A joint team of the three agencies raided the facility at about 2.30 p.m. on Friday. A massive number of illegally printed NCERT school books for almost all classes starting from Class I were recovered during the raid.

Though the books were not counted individually, it was estimated that the number could be more than 1,50,000. Sources said the books are worth over Rs 50 crore.

The illegally printed NCERT school books, sources said, were being supplied to buyers in multiple states including UP, Uttarakhand and Delhi. Sources said the books were transferred in vehicles with BJP flags to avoid any suspicion.

The police during the raid apprehended 17 male workers, including the supervisor, Subham (30), and five women workers from the facility.

The women workers were subsequently allowed to go. However, all the male workers are still under detention and their questioning is under progress, sources said.

The owner of the facility, Sachin Gupta (30), fled the store, reached the main factory in Mohkampur Enclave, near Sabzi Mandi, Delhi Road, and burnt similar books there, sources said. By the time the police reached the factory, most of the books were burnt. However, the police team could seize six printing machines from the site, sources said.

The seized items and books and the detained individuals are being examined for further leads and to apprehend others involved in the scam. Sources said a case will be registered with relevant charges.

Go on a Gastronomic Journey in Kochi