NewZNew (Chandigarh) : Sh. Mohinder Singh Ji, Chandigarh Branch Sanyojak, Sant Nirankari Mandal said that the Lakhs of devotees of the Sant Nirankari Mission from all over Maharashtra and several other parts of the country will assemble here on Friday, January 22, 2016 for the largest spiritual get-together of the Mission to be hosted by the economic capital of the country – the 49th Annual Nirankari Sant Samagam of Maharashtra. The venue for the 3-day event is the sprawling CIDCO Grounds near Central Park, Sector 28-29, Kharghar, Navi Mumbai. 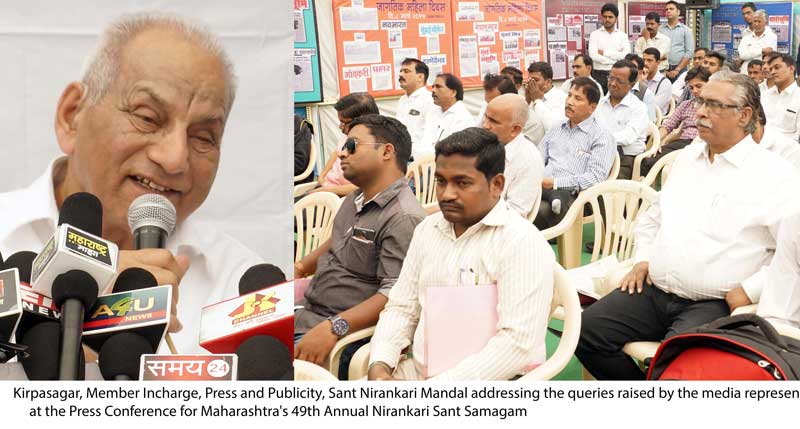 Addressing the Press conference, Shri Kirpa Sagar, Member Incharge, Press and Publicity & Internet, Sant Nirankari Mandal, Delhi, explained to the august gathering of over 100 representatives from various Newspapers and Electronic media, today ,about the endeavour of the Samagam being to build a ‘World Without Walls – Bridging Humanity Piece by Peace’.

The Samagam will provide an eye-opener to let the world realize that the walls erected in the name of religion, caste, creed and culture, language, region and socio-economic status that seek to divide humanity is not what it needs. What we all need is to dismantle the same and build bridges to bring man closer to man.

He elaborated further ,that, the social fabric today seems to be fragmented into pieces with no tolerance for each other. Let’s join these pieces which is very much possible by peaceful means. Let every human being be connected with God, the supreme source of oneness of the mankind.Let’s BRIDGE HUMANITY—PIECE BY PEACE.

The Samagam will begin on Friday with a colourful procession. It will start from Shilp Chowk, Kharghar and conclude at the Samagam venue. His Holiness Baba Hardev Singh Ji Maharaj and his gracious spouse Pujya Mata Sawinder Ji will be seated in a flower-bedecked open vehicle, while thousands of devotees will march past and seek their blessings. This will be

followed by open session which will be inaugurated by His Holiness with a Message to Mankind (at about 5.30 pm).The open session on each day will conclude with a holy discourse by Baba Ji.

On second day, thousands of the Sewa Dal men and women in uniform will organize a rally including a cultural programme, to rededicate themselves to selfless service of humanity and seek the divine blessings of His Holiness. (Its timings are from 10.30 am to 12.30 pm.).

The concluding session on Sunday will be marked by a multi-lingual poetic symposium, the subject being ‘Nafrat Vair Ki Tod Deewarein, Pyar ke Pul Banatey Jayen”.

A colourful exhibition – Nirankari Pardarshani, is another important feature of the Samagam. It depicts the history and ideology of the Mission along with various activities such as Samagams, spiritual tours by His Holiness in India and abroad, social welfare activities, etc., through photographs and models.

To create adequate awareness, Prabhat Pheri,(morning march) were conducted by Nirankari Devotees in various colonies around 70 satsang centres spread across the city on the 15th,16th and 18th January 2016 to spread the message of the Mission and with an appeal to the populace to come and attend the samagam affirm the Mission’s endeavours.

The Mission is running hospitals and dispensaries, spread across the country. Maharashtra has 23 Nirankari Charitable dispensaries.

Besides, it has 84Tailoring and Embroidery Training Centres to help the widows and other needy women to stand on their own feet. Of these, 10 are working in Maharashtra. The Mission is running 9 libraries also.

Since 2009, the volunteers of the Mission have been undertaking tree plantation and cleanliness drive across the country and abroad on 23rd February every year. Since April 2010, all the social welfare activities are organised under the supervision of Sant Nirankari Charitable Foundation.

Mission advises its followers to refrain from taking any kind of intoxicants since it considers the same as the root cause of social evils. At the same time, the Mission stresses the need for austerity in the matter of marriages and other social functions. In order to encourage dowry-free marriages, the Mission has already started organizing mass marriage functions in a big way. Like last year, the Mumbai Samagam this time will also be followed by mass marriages on January 25, 2016 where about 150 couples are expected to tie their nuptial knot.

iPhone 6 and iPhone 6 Plus Pre-Orders Off to a Strong...

‘The city has amazing talent but needs to create more platforms’:...