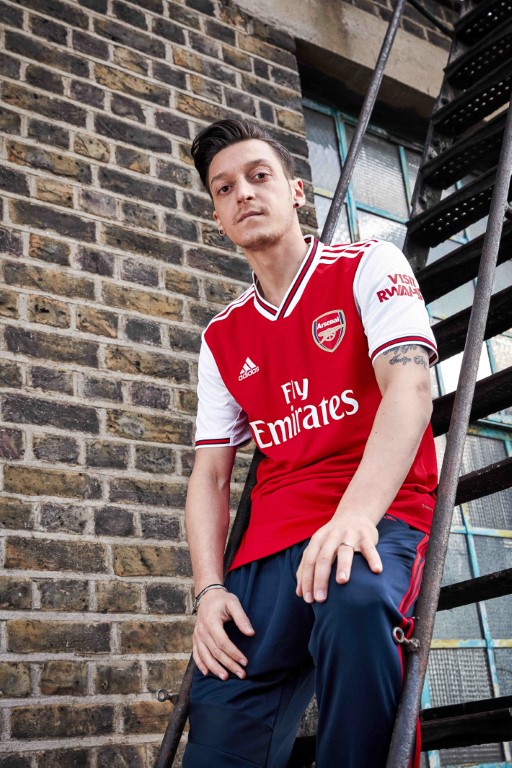 It was a fitting culmination to a glorious partnership between two footballing giants – adidas and Arsenal.

It was a glorious era, and now after 25 years adidas and Arsenal are back together to create history again and write a new chapter of success that aims to continue the winning legacy of the two giants.In the eight years(1986-1994) that adidas and Arsenal partnered with each other, in the past, the club enjoyed great success, amassing two league titles, two League Cups, an FA Cup and the European Cup Winners’ Cup.

To commence the partnership, adidas will launch the Arsenal Home Jersey,which is inspired by the iconic Arsenal jerseys from the past and celebrates the club´s authenticity with an elegant and fresh look.

Revealing a fresh new home strip design, that nods to the iconic adidas shirts of the past with a distinctively modern twist, the debut collection sets the tone for an innovative new partnership. The 2019/20 home kit kicks off the brand-new partnership between adidas and Arsenal, which aims to push the club forward both on and off the pitch.

Also Read :   Airtel partners with device manufacturers to offer 4G smartphones for the price of a feature phone

The all-new kit design for the 2019/20 season features a classic all-over red body, complimented by popping white sleeves and contrasting collar. The white high collar design is emblazoned with a central red stripe and black trimming. This design is repeated on both sleeves and the distinctive three stripes run across the shoulder in bright white.

“Thepartnership with Arsenal FC is a statement of intent and strengthens our position as the leading sports brand. adidas and Arsenal have a rich and successful history, and we are excited to write a new and successful chapter with the club. We are bringing back the history as an inspiration in our jersey design which the fans would love.”said Manish Sapra, Senior Marketing Director, adidas India.

Arsenal has a substantial fanbase in India and is second only to Manchester United in terms of the fan following. The club has a global fan base, consisting of 37 million Facebook followers, 14.5 million twitter followers, and 14.4 million followers on Instagram.

With this partnership adidas now has a formidable  portfolio of the top European clubs and enjoys a strong Share of Voice in the Premier League with the two biggest clubs – Arsenal and Manchester United.

Kapil Sathe, Head of the Arsenal Pune Supporters club, said,“We are looking forward to the team sporting the adidas three-striped jerseys in the coming season. adidas and Arsenal both have a rich football heritage and we hope this partnership inspires great football from the team on the pitch.”

To give Arsenal fans in India, a reason to celebrate, adidas India will also launch a special consumer promo, wherein two lucky Arsenal Fans shall get a chance to fly to the Emirates Stadium to watch a Premier League Game.

The Home Jersey shall be available for purchase starting 1st July,across the leading adidas stores,in Indiaand on shop.adidas.co.in . It shall retail at INR 4,999 for adults and INR 3,799 for kids.