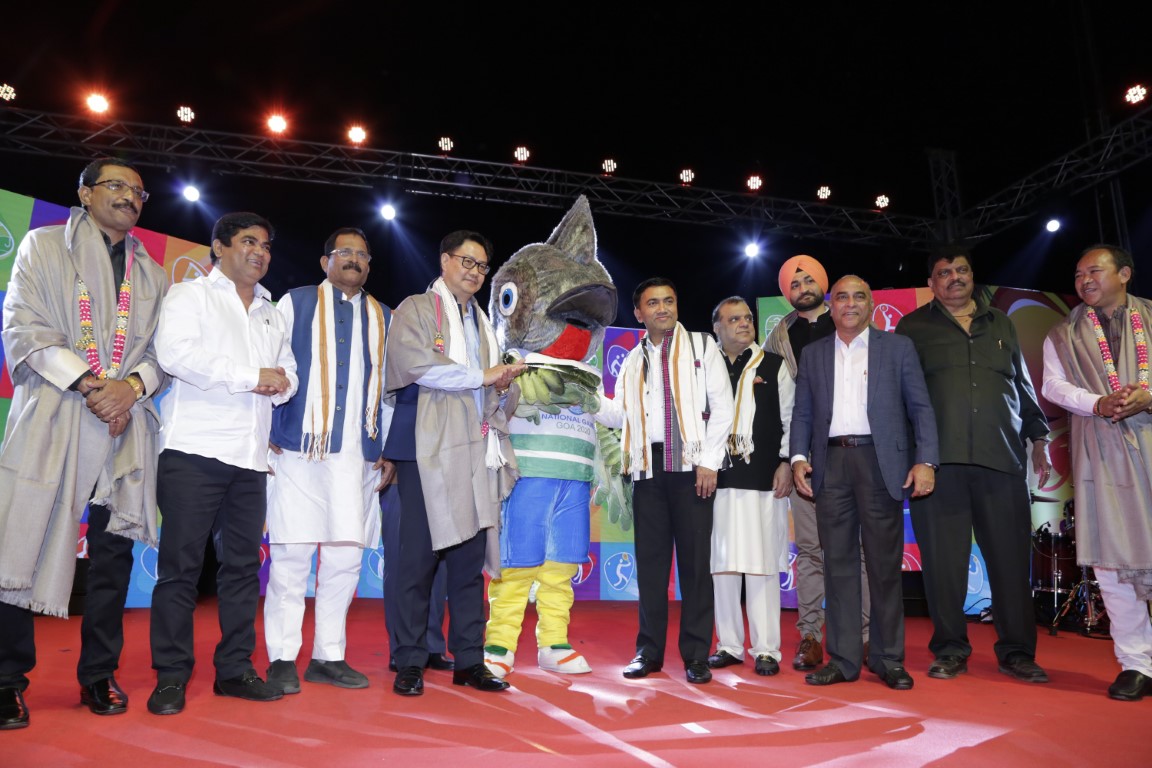 Rubigula was an instant hit amongst everyone present there with everyone jostling to get a glimpse of the mascot. The name for the mascot ‘Rubigula’ was chosen after sports enthusiasts from across India were invited to submit their suggestions through a social media contest.

Two-time Olympic Gold Medalist Sushil Singh and World Champion in Athletics Anju Bobby George also graced the evening with their presence.
Goa will be hosting the 36th edition of the National Games from 20th October to 4th November 2020. The event will see participation by 36 states and union territories, 12,000 + athletes/officials and will host 37 sports disciplines across 24 venues in Goa.

Commenting on the launch event, Chief Minister of Goa & Chairman of the NGOC Dr. Pramod Sawant said, “There was no better way to begin the festivities for the National Games than the unveiling of the mascot ‘Rubigula’. The mascot incorporates the best elements and characteristics of Goa and the Goan people. It is another step forward for the preparations of the National Game and Rubigula will generate even more interest for these Games, especially among young people.”“It was the vision and dream of our late Chief Minister of Goa, Shri Manohar Parrikar to host the National Games in Goa. We are confident of successfully executing the event. We are on track to host the multi-discipline sporting event which will bring superlative talent from across India to the Goan turf. Through these Games, we also wish to showcase our culture, food, natural beauty and extend our hospitality to all the States and UTs that will be coming to Goa during the Games,” Sawant added.

Union Minister of State (I/c) for Youth Affairs and Sports, Shri. Kiren Rijiju said, “Goa is a sport loving state and with the Government actively promoting sports in the State there is no reason why Goa cannot become a powerhouse in sports. World class infrastructure has been created for these Games which will benefit sportspersons in the State. The Games will help imbibe a sports culture in the State. We are expecting a grand celebration from October 20 to November 4 which will bring athletes from across India. I’m confident that Goa will do a great job in hosting the Games and the National Games 2020 will be the best and biggest ever in the history of India.”

Dy Chief Minister and Sports Minister of Goa, Shri Babu Manohar Azgaonkar said, “Enthusiasm and interest for the National Games Goa 2020 is growing and will continue to grow as we get even closer to the staging the country’s biggest multi-discipline sporting event. The infrastructure created for these Games will have long-term benefits for the State and its people in the years to come. With just nine months to go for the event, activities around the National Games are set to significantly increase in the coming months with Rubigula leading the flock. I urge everyone to actively participate to make the Games a successful event.”

The guests at the Launch Event were treated to an extravagant series of performances that embodied the spirit of Goa. The splendid evening was hosted by renowned television personality Anusha Dandekar.