Godrej Appliances urges citizens to fight against a new age evil – e-waste: Godrej Appliances, one of India’s leading players in the home appliances segment, launched a week-long e waste awareness campaign #IssRaavanKoMatJalaao on the eve of Dussherra, in the city of Chandigarh. 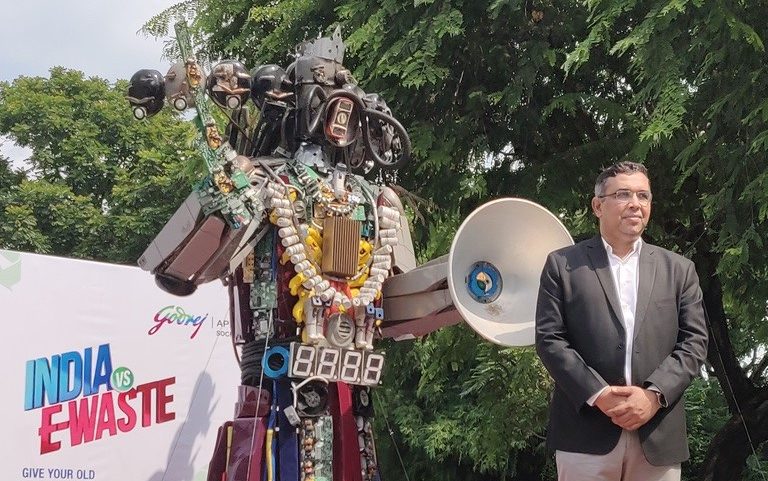 At the center of this awareness campaign is a life sized Raavan made from e-waste material like refrigerator components, washing machine parts, cables, compressors, chargers, circuits etc.

This new age Raavan will be roaming around the cities of Chandigarh, Mohali and Panchkula spreading awareness about the ill effects of e-waste on us and the planet at large. Through this initiative the brand urges all citizens of our planet earth to proper dispose off e-waste just by calling its toll free number 1800 209 5511.

Green has been imbibed in Godrej’s DNA since its very inception. Godrej Appliances has been continuously setting new benchmarks in the industry, not only by offering eco-friendly and energy-efficient appliances to consumers but by adopting green idealogy in the various processes as well.

The plant has also tied up with authorized recyclers for the proper disposal of the e waste generated during production and by the end of lifetime of the products made, making it the right choice for initiating this campaign.

The campaign #IssRaavanKoMatJalaao, is a perfect example of communicating a relevant message woven in the threads of our culture. As part of the Indian mythology, Raavan is considered a representation of everything that is evil in nature, while Dussherra is a celebration of the good defeating the evil.

With Dussherra round the corner, the brand highlights the evil that e waste is to the environment and human health through this life size Raavan installation created out of e-waste.

The slogan for the campaign ‘#IssRaavanKoMatJalaao’ is an appeal to the masses to responsibly dispose the e waste, instead of handing it over to rag pickers who end up burning the e-waste, which is harmful for the environment and human alike.

During the press meet, Mr. Mrugesh K. Gandhi, Associate Vice President – Manufacturing & Location Head – Mohali Plant, Godrej Appliances, “E-waste is becoming a major environmental problem and posing a threat to human health. According to the Global E-Waste Monitor 2017, India generates about 2 million tonnes (MT) of e-waste annually, which is an alarming statistic. And surprisingly only about 10 per cent of the total e-waste is recycled responsibly in India. The ethos of green and environment-friendly being the core of the brand, we conceptualized this e-waste awareness campaign #IssRaavanKoMatJalaao, to create awareness in the community towards the burning issue of e-waste and how individual and community involvement is crucial for proper e waste management.’

Speaking on the campaign, Ms. Swati Rathi, Head – Marketing, Godrej Appliances, said, “We, Indians are bound to our traditions and rich culture. Dussehra is a symbol of good over evil across all sections of the society. Keeping this in mind, we collaborated with a local young talent of Chandigarh and winner of numerous awards, Tejinder Singh, to creatively narrate the story behind Dusshera with the twist of the current evil – e waste, in the form of a lifesized Raavan made of e-waste. The idea is to make our consumers recognize the evil in e-waste and ensure that we all make efforts to win over this evil this Dusshera by responsibly disposing the same.”