NewZNew (Sci. & Tech.) : Google Nexus 6 price in India has been officially confirmed thanks to the listing of the smartphone in the Play Store. Google Nexus 6 32GB variant has been priced in India at Rs. 44,000 for the 32GB variant, while the 64GB variant will be available in India at a price of Rs. 49,000. The prices are in line with NDTV Gadgets had exclusively reported earlier this week.

Google Nexus 6 is priced at $649 (approximately Rs. 40,000) for the 32GB variant and $699 (approximately Rs. 43,000) in the United States. The smartphone will be available in two colours: Midnight Blue and Cloud White. There’s no word yet on when the smartphone will be start shipping in India, but with the price now listed on the Play Store, the official launch should happen within the next fortnight.

Google Nexus 6, which is being manufactured by Motorola, comes with a 5.96-inch QHD (1440×2560 pixels) display at 493PPI. The smartphone is powered by a 2.7GHz quad-core Qualcomm Snapdragon 805 processor alongside 3GB RAM. As mentioned above, the Google Nexus 6 comes with 32GB and 64GB internal storage options. The smartphone comes with 13-megapixel and 2-megapixel rear and front cameras respectively.

The Google Nexus 6 runs the most recent version of Android i.e. Android 5.0 Lollipop, which comes with a fresh look thanks to Material Design and a host of new features. The Nexus 6 sports a massive 3220mAh battery, which adds to its bulk, since the smartphone weighs 184 grams and measures 82.98 x 159.26 x 10.06mm.

The Google Nexus 6 was unveiled last month, with Motorola saying in a statement at the time that “Nexus 6 will come to 28 countries (including India) across Europe, Asia-Pacific and North America starting later this year and as we head into Q1.” 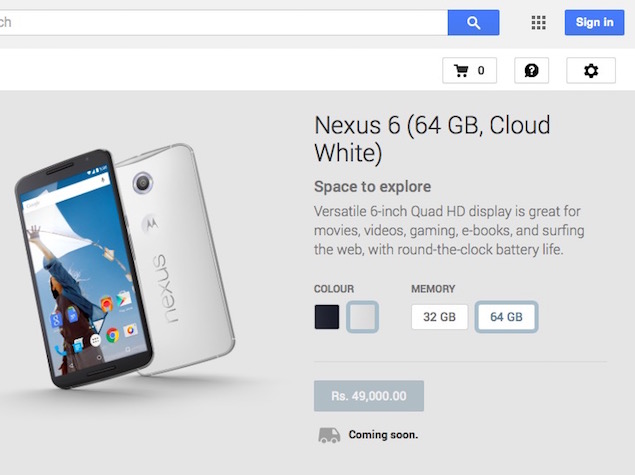 Google Nexus went up for pre-orders in the US recently and was sold out within a few hours.

Vogue Wedding Show in partnership with the Taj Group is back...