Guru Randhawa shoot a Cheat Song with Emraan Hashmi : The producers of the forthcoming Emraan Hashmi-starrer ‘Cheat India‘ shot a promotional music video, featuring Hashmi and the current sensation Guru Randhawa. This was a coup of sorts as their first-time pairing is bound to enjoy phenomenal mass outreach when the song comes out. 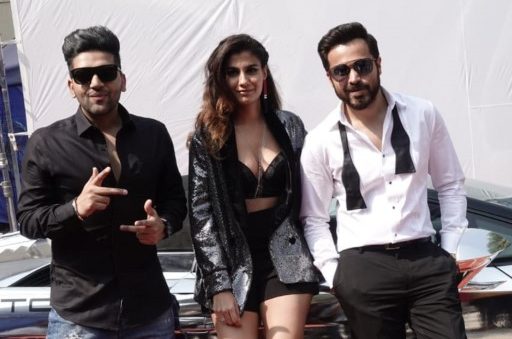 Titled ‘Kudi Daaru Wargia‘, the track, composed and rendered by Guru, was picturized on an elaborate set in Mumbai. This marks the first time that an A-list Bollywood star has featured in a video with Guru, who has continuously belted out chartbusters like ‘Ban Ja Rani’, ‘Lahore’, ‘High Rated Gabru’, ‘Suit Suit’ and ‘Kaun Nachdi’ in recent times.

The video has been directed by Nitin Parmar of Equinox Films, the renowned production company helmed by ace ad-man and ‘Neerja’ director Ram Madhvani. It has been choreographed by Vijay Ganguly (‘Jagga Jasoos’, ‘Tumhari Sulu’, ‘Stree’, ‘Badhaai Ho’, etc.) and also features the debuting heroine Shreya Dhanwanthary along with a multitude of students, given the film’s story about the education system.

Said the producers, “We knew that pairing Emraan and Guru would be huge. It was Bhushan’s (Kumar) idea to go with this song as it has chartbuster potential. Keen to give the video a young and stylish vibe for the millennials, Ellipsis roped in Equinox to ideate and shoot. We are confident that the track will be the party anthem of every youngster in the new year.”