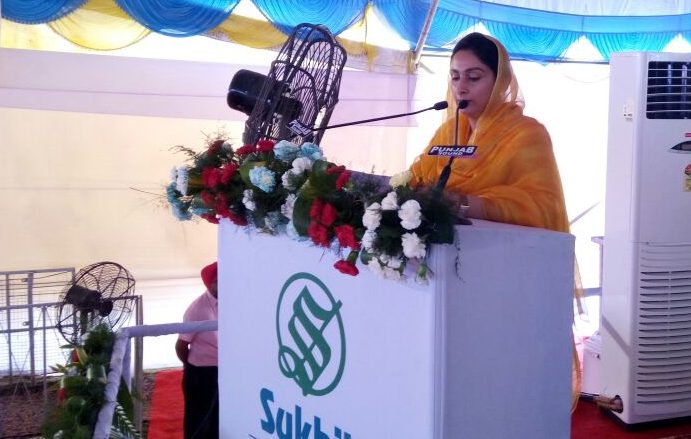 Speaking on the occasion Shri Harsimrat Kaur Badal said that Maize is an amazing cereal and is an alternate to Jhona (paddy) and Kanak (wheat). Maize is rich in protein, provides nutritional requirements that India needs and Maize consumes much lesser water and could contain the problem of further water depletion. The Mega Food Park is being developed by Sukhjit Mega Food park & Infra Limited at village Rehana Jattan, Phagwara, District Kapurthala, Punjab.  She also said that Kapurthala has been declared as a Dark Zone district where slow desertification is happening because of overexploitation of water due to cash crops.

Smt Harsimrat Kaur Badal also said that there is an urgent need to turn to Maize and our government would relentlessly work to make Maize as the third viable staple crop of Punjab after Wheat and Rice and growing of maize with enhanced quality of seeds. A Maize based Food Park is like putting an engine to the cart so that cultivation of maize grows leaps and bounds.

Highlighting the new flagship scheme “KISAN SAMPADA YOJANA”, Minister of Food Processing Industries said that with the aim of making every farmer a Food Processor also, this scheme has been designed where farmers can also set up big or small food processing units and marketing units. She also said that enterprises willing to set up maize based food processing units in Sukhjit Mega Food Park would get loan from NABARD at affordable rates. She also thanked the state government for extending support for the establishment of the Mega Food Park.

Banks should facilitate the farmers & Self Help Groups while providing...