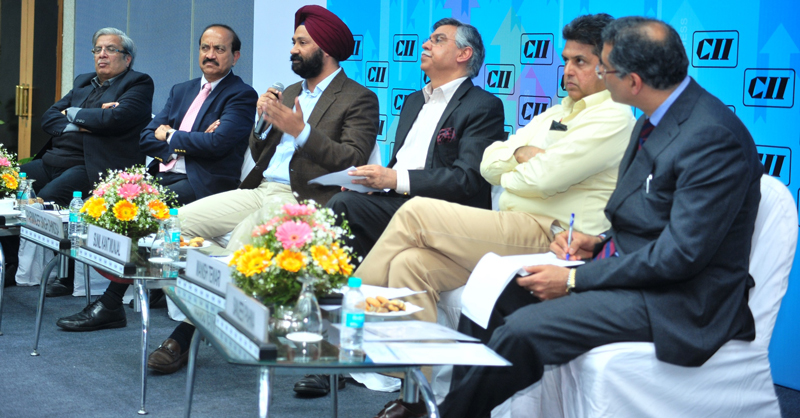 NewZNew (Chandigarh) : “There is an immense gap between perception and reality as far as fiscal, societal and industrial scenario in Punjab is concerned”, said Mr Parminder Singh Dhindsa, Hon’ble Minister for Finance & Planning, Institutional Finance & Programme Implementation, Government of Punjab while addressing the Session on Reviving the Growth Momentum in Punjab organised by Confederation of Indian Industry (CII), coinciding with the CII Punjab state Annual Session at its NR Headquarters, in sector 31 A, here today.

Even as per the 14th Finance Commission, now Punjab is not a revenue deficit state. It is due to our efforts of fiscal consolidation in the last few years bringing our debt to GDP ratio down to 32 % from 42 % as also the fiscal and revenue deficit by 1 % in last decade. We have sensibly avoided social welfare schemes now and have not indulged in populist measures. Our cash flow is indeed low because we have avoided borrowings, despite inflation and huge increase in salaries and well-being of our citizens”, he added.

Defending the power subsidy to the farmers, he said that “Most states are giving Agri subsidies far higher than Punjab. Ours was even lower than Haryana last year. Madhya Pradesh offers bonus to its farmers and so on. It is imperative just like the incentives to the industry, but I agree that there needs should be a sensible power use by the farmers”.

Join Newznew on Telegram
Also Read :   MEE to start a biofuel corridor across Maharashtra Its biodiesel Indizel to be available at Khalapur

Regarding the perception of industry’s flight from state due to poor policies of the state government, he said that “The entrepreneurs are moving out to other states primarily due to proximity to ports for better connectivity and to sources of raw materials and not due to our policies. Further, the incentives to the hill states have also hampered us. Hopefully, now the industry will come back to Punjab as the package is now over”.

Regarding a query on lack of skill development in Punjab, he said that “We would soon open skill centres in PPP mode at Jalandhar and Ludhiana to skill 2 lakh youth in next year itself”.

“Our new Industrial policy is certainly mainly for the benefit of new companies as well as companies going in for expansion. It has been rated as one of the best during a meeting with Prime Minister Modi where all states’ representatives were present”, he added.

On land bill, he said that “We want the consent of the farmers to be considered without which there should be no land acquisition. This is our major concern against it.

Sharing about the effectiveness of Punjab Bureau of Investment Promotion – Invest Punjab, the minister shared that “Recently we gave all necessary permissions to Amul for starting operations in just 15 days while ITC got it in just 26 days. In the upcoming budget, I would certainly do a lot more for the Micro, small and medium units. We have all characteristics to revive growth of industry here, but we need to market our state well enough and certainly improve our mechanism and delivery structure”.

“Though we would get only 600 -700 crores more than earlier as our share from devolution of taxes, which is meagre, but we have got the freedom to spend our share which is how we can use the funds as per our priorities”, he added.

“Punjab should do away with power subsidy to the farmers, because it leads to a lot of wastage and puts huge burden on the grid as well. The govt should rather spread awareness about its sensible use and incentivize its use”, added the CII Past President.

“Punjab Govt should also consider tax rationalization. VAT is being charged heavily here which is huge discouragement to the industry. It should rather be lower than other states since it is far away from ports and sources of raw materials as also a net exporter of products”, said Mr Munjal.

Dr Pramod Kumar, Chairman, Punjab Governance Reforms Commission said that Punjab desperately needs to undergo a complete paradigm shift. Punjab needs to restore its trust and fiscal deficit as also invest heavily in quality of education. Capital will not come here, if there are no profits. We have to create such an environment and policy framework that is conducive to profits.

Mr Manish Tewari, Former Union Minister of State for Information & Broadcasting (IC), India said that “there is a need to come out of the denial mode and accept reality. Punjab is highly cash starved since the tax base is too narrow here. Punjab desperately ned private investments to prevent its infrastructure sector from falling apart. Even our Municipal corporations do not have any funds. Punjab has missed the Manufacturing ship. Now the only option we have is the Knowledge based industry. We need to capitalize on education and healthcare.

Srei Equipment Finance Limited to raise up to Rs 5,000 Million...