With India all set to celebrate its 72nd Independence Day, Hyatt Regency Amritsar has chosen a novel way to mark this momentous occasion. 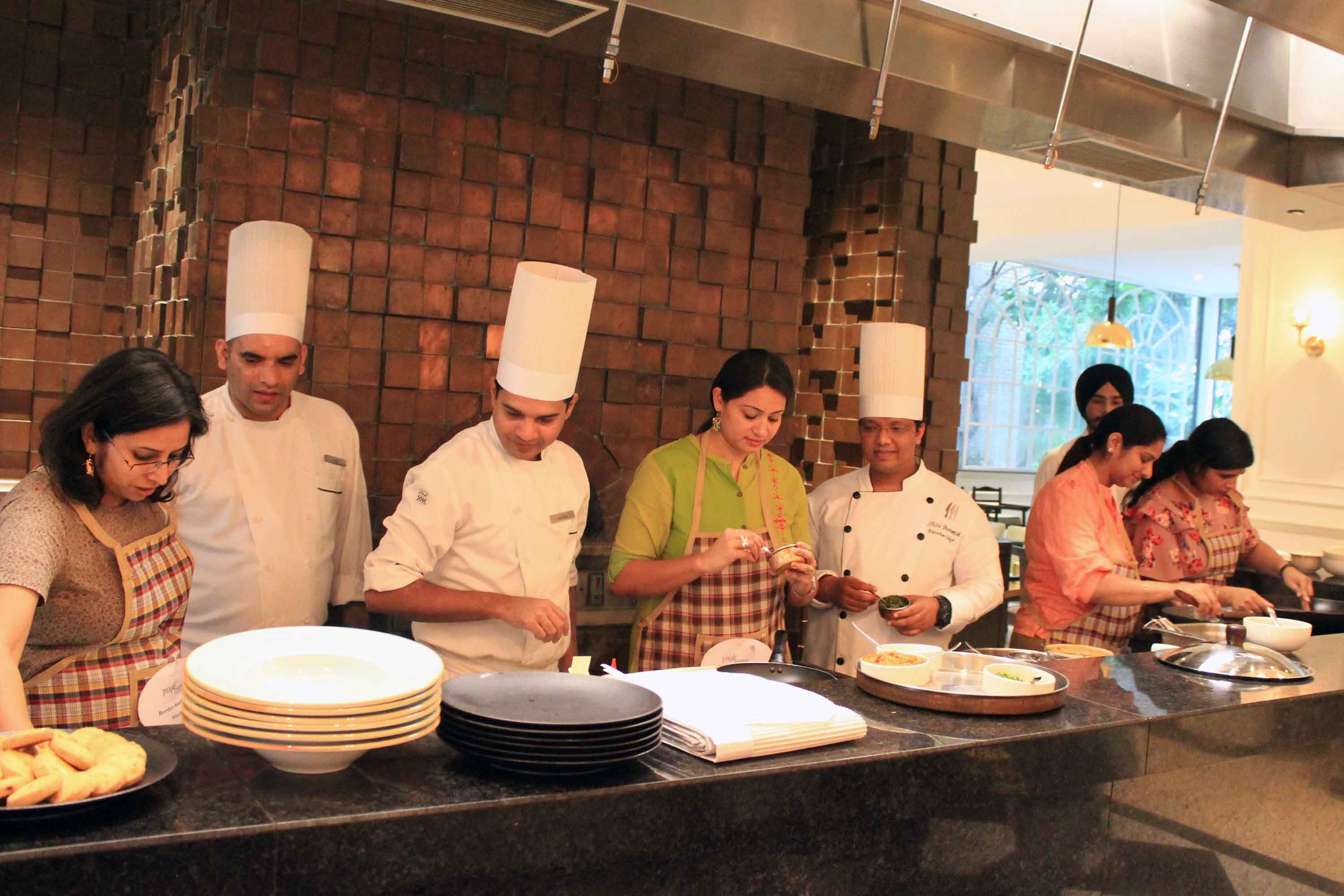 The hotel today set the tone for its Independence Day festivities by inviting the wives of Army men posted in Amritsar to don the mantle of “star chefs” at Punjab Province, its North Indian bistro, and prepare “star dishes” as a tribute to the Men in Uniform.

It was an engaging and exciting afternoon for Army men’s wives as they took charge of the kitchens at Hyatt Regency Amritsar as part of a fun-filled cookery workshop. Punjab Province turned into a culinary stage as they took the centre stage as the stars of the show and showcased their culinary skills. Flanked by a team of the hotel’s finest Chefs, the ladies were invited to the hotel as Star Chefs to cook special delicacies belonging to their home state or the ones close to their hearts. They displayed their gastronomic expertise as they prepared some delicious dishes, much to the delight of the gathering and the hotel staff who applauded their effort and relished every bit of the delicacies prepared by them.

As an acknowledgement of their effort, some of these delicacies will be  included as ‘Star Dishes’ in the menu of the upcoming Border Food Festival, which forms a part of Hyatt Regency Amritsar’s elaborate Independence Day celebrations. Beginning this Sunday with the hotel’s extremely popular Hyatt Big Brunch Weekend, the Border Food Festival at Punjab Province will serve an epicurean spread of cuisines representing the border states of Punjab, Rajasthan and Jammu & Kashmir in an ode to the soldiers guarding the borders at Wagah, Jaisalmer and Siachen. Followed by the Sunday Brunch at Hyatt Big Brunch Weekend on August 11, residents of Amritsar can further join the Border Food Festival at Punjab Province at dinner time on August 12 and August 15 as part of Hyatt Regency Amritsar’s Independence Day celebrations. A specially curated set-menu containing some of the best dishes from Border Food Festival will be available for lunch and dinner on August 13 and August 14 at Punjab Province.

“The contribution of armed forces in securing our borders and guarding our sovereignty cannot be overemphasized. Army men’s families play a crucial role by wholeheartedly supporting their husbands and boosting their morale, for which they deserve a huge applause. Today’s engagement was meant to provide a platform to Army men’s wives where they can showcase their culinary skills and prepare delicacies close to their hearts. These delicacies will adorn the menu of our Border Food Festival, adding a tinge of patriotic spirit to the Independence Day celebrations at Hyatt Regency Amritsar,” said Mr Suman Dutta Sharma, General Manager, Hyatt Regency Amritsar.

The Border Food Festival will see the culinary artist Chef Shiiv Parvesh, the Head Chef at Hyatt Regency Amritsar, paint a captivating canvas of flavours and fragrances in the form of menu. “The menu of the Border Food Festival will serve some of the most exquisite gastronomic wonders from Punjab, Rajasthan and Jammu & Kashmir. This will satiate the culinary cravings of the guests no end while giving them an opportunity to traverse the culinary landscape of these border states and pay homage to the soldiers guarding the borders at Wagah, Jaisalmer and Siachen,” said Chef Shiiv Parvesh.

The menu representing the Wagah Border will offer delectable delights like Matka Gosht, Kadi Pakora and Aloo Wadiyan. From Jaisalmer, dishes like Dal Bati Choorma, Laal Maas, Gatte Ka Saag and Kachhi Mirch Ka Murgh, among others, will add a splash of Rajasthani flavour to the celebrations. As a mark of respect to the soldiers serving in Siachen, epicurean wonders from J&K, including the exotic bread-like Seermal, Roganjosh, Yakhni Pulao and Kahwa, will grace the menu, giving patrons a wholesome culinary experience at the Border Food Festival at Hyatt Regency Amritsar.

The mouth-watering ‘Border Food Festival’ can be enjoyed for Brunch at Punjab Province from 12 pm to 4 pm on Sunday, August 12, and subsequently for dinner on August 12 and August 15 between 07:30 pm to 11:30 pm. The ‘Border Food Festival’ meal for one is available in two packages. Package one is priced at Rs 1450 inclusive of taxes which offers unlimited food and a range of mocktails. Package two, priced at Rs 1850 inclusive of taxes offers unlimited food, mocktails, beers or two glasses of wine. A specially curated menu containing some of the best dishes from the Border Food Festival will be available for lunch and dinner on 13th and 14th August 2018 as a set menu priced at Rs 1099 inclusive of taxes which will also offer a complementary pint of beer. You can call at 0183- 5251234 or +91 8054004109 to reserve your table at Punjab Province at Hyatt Regency Amritsar.