ICAR result of AIEE 2017 will now be announced by July 5, 2017, an official notice issued here by Indian Council of Agricultural Research (ICAR) says. The notice for ICAR result 2017 declaration date can now be viewed at ICAR website (www.icarexam.net). 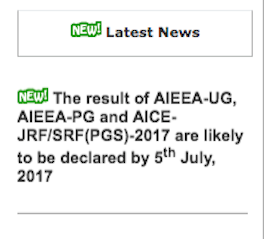 The results of the said examination conducted by ICAR were scheduled to be released today on June 30, and students who wrote the entrance had been waiting with bated breath for the results as AIEEA remains one of the most prominent gateways to agricultural education prospects. However, earlier today, the Council didn’t release the result but it did release a notice informing the candidates about the declaration date.

ICAR had conducted the All India Entrance Examination for Admission to Bachelors, Masters and Doctorate degree programmes offered at agricultural and allied sciences at Agricultural Universities.

ICAR UG 2017 (for undergraduate admissions) was conducted on June 10, for PG aspirants the test was conducted on June 11, and for AICE-JRF/SRF (PSD) aspirants, AIEEA was held on 11 June. Officials data lacks but preliminary reports here state that in advance of 50 thousand aspirants take ICAR entrance exam each year. A total of 52 regional centres were set up across the country for the smooth conduct of the examination.

The students who get placed in the merit/rank list of ICAR AIEEA 2017, get the chance of admission under 15% All India Quota to the Universities across India. Other than that, 100% seats in NDRI Karnal, RLB CAU, Jhansi, and Dr. RP CAU, Pusa, Bihar.

Currently, there are 1799 seats on offer through ICAR entrance examination for the academic session that’ll kick off in 2017. Of them total, 1021 are for agricultural aspirants, 211 seats are in Horticulture, 55 in Forestry, 83 in Fisheries, 104 in Community Science, 7 in Sericulture, 177 in Agricultural Engineering, 72 in Dairy Technology, 29 in Food Technology, and 40 seats are in biotechnology.

Candidates should note that the ICAR has said that ICAR result 2017 is ‘likely’ to be declared on 5th July, so even that’s a tentative date and postponement/preponing can happen. The result will be published at official ICAR website: www.icarexam.net and students would be able to check it then.