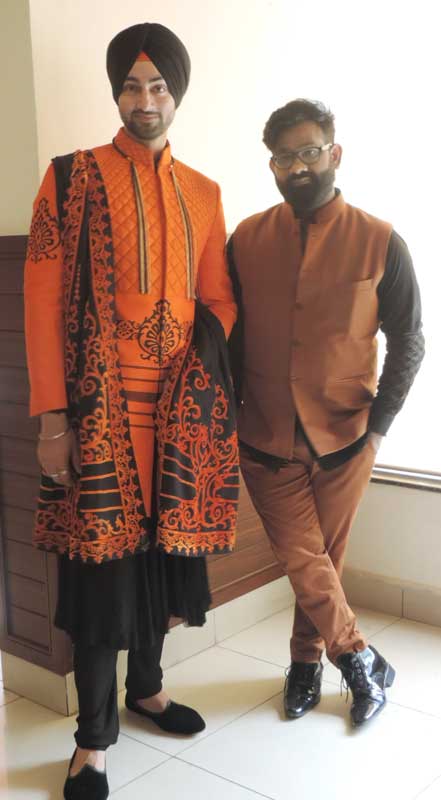 NewZNew (Chandigarh) : They were five brothers, all uneducated, from a family with little means. They lost their father at an early age. There was one among them who still had the courage to dream of doing something special. So, the other four supported him by taking over the burden of running the house, leaving Harish K Vashist to pursue his dreams. Harish is today an accomplished designer and a wedding sherwani specialist, who has participated in several fashion weeks across the country.

In Chandigarh to explore opportunities for expanding his reach to newer markets, Harish shared his experiences as a struggler and his dreams for the immediate future. Harish, who has done a lot of work in ethnic wear for weddings and parties, said besides being uneducated, he was not bestowed with any technical knowledge. And, with no one to mentor him, pursuing his dreams was one hell of an uphill task. But unflinching support from his brothers and his perseverance slowly began to turn the tide.

Harish K Vashist made a mark in the fashion designing world, weaving magic in wedding and party ethnic wear using purely desi materials like cotton and silk with embroidery in silk thread and zari. Hand block printing is his new passion. His intricately embroidered shervanis, jackets, kurta pyajamis, waist coats, shirts, pants and shoes have found admirers among several international crickets like Ross Taylor of New Zealand, Kevin Pietersen of England and Gary Kirsten of South Africa, among others who visited his men’s fashion studio in Karol Bagh in Delhi, where his brothers are now helping him out.

Having participated in and left an indelible mark at various fashion weeks across the country, including Calcutta Fashion Week, Lucknow Fashion Week, Parampara Fashion Mahotsav, etc Harish Vashist’s romance with fashion weeks is all but over and he is now dreaming about designing and preparing wedding dresses for couples in mass marriages with some help from the government to make the occasion memorable for them.

He is already helping out youngsters with lesser means with tips on fashion designing at vocational training centres and is keen on deepening his involvement further in this endeavour.

W Hotels Electrifies the Shanghai Skyline with the Debut of W...