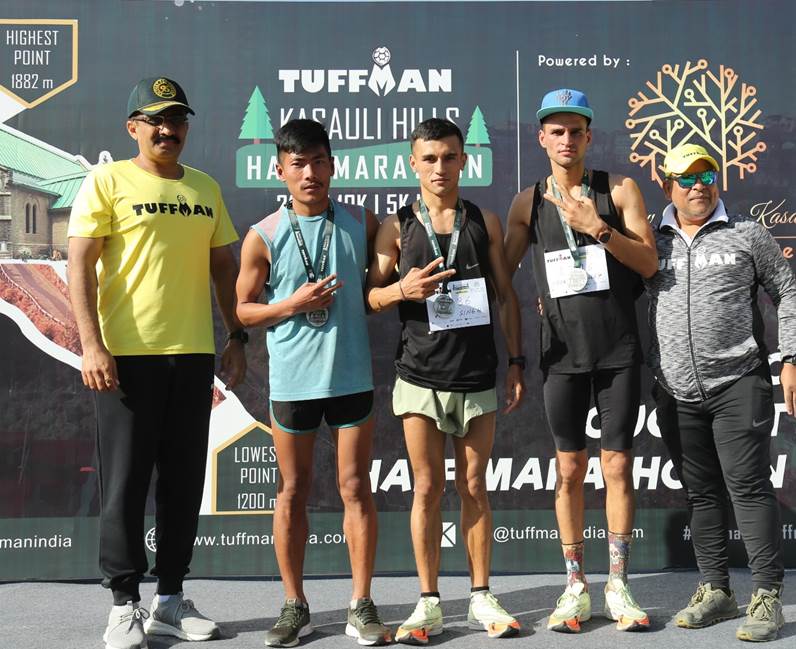 Over 1000 runners from across the country participated in the hill run.

Apart from the half marathon – which is considered India’s one of the toughest 21km hill runs – there were 10km, 5km and 3 km runs.

The first position in the men’s 21km run was jointly shared between Indian Army personnel Mayangam Lungleng and Amit Singh. Both the runners clocked 01:24:28 hrs. They were followed by another army runner Muzamil Bashir, who clocked 01:26:56 hrs.

In the 10km men’s section too, the top three positions were grabbed by Indian Army runners. Kailash Singh with timing of 36:34 mins won gold, followed by Bhuwan Rana (36:59 mins) and Rohit Kumar (37:33 mins).

Over 100 local government school kids also took part in the 3km and 5km runs. They were sponsored by Glenview Villas Kasauli.

Lauding the efforts of participants of all categories, Brig CS Pathania said, “Running is not just about physical stamina but also needs mental strength and testing yourself. I am happy to see the enthusiasm and participation from various parts of the country is just beautiful in itself to run a half marathon and keep fit for the daily lifestyle.”

Also Read :   Infosys Board Inducts Roopa Kudva as Independent Member of the Board

The event was powered by Glenview Villas Kasauli which is a RERA-approved luxury housing project located in the lap of nature. Post-race refreshments were looked after by Welcome Heritage Glenview Resort, Kasauli and medical facilities were looked after by Max Healthcare, Mohali. Wow Skin Science was the skincare partner and Bodyvine was the performance partner for the event.

The registrations for the virtual edition of the race to be held on 6th – 8th May are open till April 31st at www.tuffmanindia.com or bit.ly/TuffmanKasauliVR. General & sponsorship queries can be addressed at [email protected].

STAR Plus and Amitabh Bachchan come together after 15 years!