Businesses invited to partner in India and Rajasthan’s Progress

NewZNew (Jaipur) : The Indian economy is witnessing a transition of sorts and is becoming stronger. This was the view of Mr. Suresh Prabhu, Minister for Railways and India’s G-20 Sherpa in Jaipur today. Mr. Prabhu was addressing the Inaugural Session of The Partnership Summit 2015, organized in cooperation with the Department of Industrial Policy and Promotion, Ministry of Commerce and Industry, Government of India and the Government of Rajasthan from January 15-17, 2015. 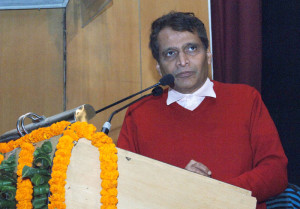 Elaborating further, Mr. Prabhu stated that in the past couple of days, the Reserve Bank of India has reduced interest rates, the stock markets was on the rise and so was the Rupee. These three indicators, in his view, were a sign of things to come.

Mr. Prabhu stated that the government was making a conscious effort to diversify the Indian economy and develop the manufacturing sector in the country. He stated that a stronger growth in manufacturing and the agriculture sectors would spur the further growth of the services sector.

According to the Minister, the government was taking efforts to make the states a partner in growth. It is for this reason that the government set up the NITI Aayog. He also called upon industry to partner with the government to spur growth in the country.

The Minister stated that there were several opportunities that were now emerging thanks to this transformation. These include solar power and logistics among others.

Inviting business to partner in Rajasthan’s progress, Ms. Vasundhara Raje, Chief Minister of Rajasthan stated that her state was undertaking a slew of economic reforms. She specially highlighted the reforms that her state was undertaking in the labour front y amending old outdated legislation. She observed that this had become a model for the rest of the country and the Prime Minister had called on other states to follow the Rajasthan model.

The Chief Minister stated that some of the advantages that Rajasthan offered included the sheer size of the state, its natural resources, its rich heritage complete with forts, palaces, arts and culture and its strategic location among others.

She highlighted that her government was giving a special impetus to infrastructure development. She observed that with the development of the Delhi Mumbai Industrial Corridor, several opportunities for industrial development were expected to arise. She called on industry to take advantage of this opportunity and set up smart cities and knowledge hubs around the corridor.

In his address, Mr. Nikola Gruevski, Prime Minister of Macedonia invited Indian industry to invest in his country. Highlighting some of the advantages of investing in Macedonia, the Prime Minister stated that his country had one of the lowest tax rates in the world. The World Bank, in its Doing Business Indicators had ranked Macedonia as one of the top 30 easiest places to do business.

The Prime Minster stated that his country had set up Free Economic Zones where companies would not be charged personal or corporate income tax, duty free import of equipment would be allowed and land would provided to industry on very long lease. The Prime Minister stated that some of the sectors for investment could include auto components and food processing among others.

In her address, Ms. Nirmala Sitharaman, Minister of State (Independent Charge) for Commerce and Industry, observed that India carries the potential opportunity to position itself as the leader of the economic growth with 1.3 million enterprises, 1.2 billion people, over 535 million under 25 years of age. According to her, India’s talent pool has always been a great draw. Every year, 140,000 Indian engineers join the ranks of companies across Europe and the US alone. Its 3.13 million engineers today export information technology services to eighty per cent of the world’s Fortune 500 companies. It is amongst the six countries of the world to own and operate indigenous space technologies.

According to the Minister, the time was ripe to forge new partnerships and break out of the low growth cycle. It was in this context that the Government had formulated several path-breaking initiatives such as the Make in India campaign. She stated that the government’s objective was to make doing business in India much easier.

Highlighting some of the reforms that had been undertaken, the minister spoke highlighted the easing of FDI restrictions in railways, defense and construction, labour and land reforms among others.

According to the Minister, the idea was to project Democracy, Demography and Demand as the key strengths of India. She observed that thanks to the reforms being undertaken, business sentiment in the country had improved significantly.

In his address, Mr. Ajay Shriram, President, CII stated that the many initiatives announced and decisions taken by the government across key areas of the economy had greatly reassured businesses and enhanced investor confidence. He felt that these initiatives would help transform India in the shortest possible time.

Earlier, while welcoming the delegates, Mr. Chandrajit Banerjee, Director General, CII stated that the world would like to see an active engagement and collaboration with India and stimulate discussions among key stakeholders – political, institutional, business, media and academia – on the best strategies to foster balanced and equitable growth.