Inquilab Zindabad. A phrase that was coined by Maulana Hasrat Mohani in 1921 and later popularised by Shaheed-E-Azam Bhagat Singh, it became one of the rallying cries of the Indian Independence Movement. The revolution that aimed to end British tyranny, oppression and dominance over the subcontinent might have succeeded, but it has taken on a newer meaning in present day Punjab.

Keeping this in view, Sahaj Music Records announces the launch of their new single, “Inquilab”. Sung by Ravi Inder Sheen, the song aims to promote the ideology of never giving up and is dedicated to all those people who, despite facing numerous difficulties, have never bowed down to any kind of oppression.

Talking about this new venture, the producers Bhanu Sharma and Ved Yadav said that currently, Punjab is undergoing a difficult time due to a rise in drug addiction, female foeticide, Casteism, farmer’s suicides and violence. This song is an attempt to rally the youngsters of the state to bring forth a revolution that aims to put an end to all these evils. If all the youngsters and the entire population in general devote their time and energy towards following the ideology of Shaheed-E-Azam Bhagat Singh, Punjabi Society will once again reclaim its lost glory.

“We have decided to release the song on September 28, as this is the 110th birth anniversary of Shaheed-E-Azam Bhagat Singh. By interacting with people at places like the Darbar Sahib and Jallianwala Bagh on Bhagat Singh’s birth anniversary, we will try to highlight the importance of the words Inquilab Zindabad and their significance in today’s day and age”, says the singer of the song, Ravi Inder Sheen.

The lyrics of the song Inquilab have been penned by Prince Dhunna and Ravi Inder Sheen. It was Prince Dhunna’s poem `Tusi kuj hor vehnye ho’ which touched a chord with Sheen and Sahaj Music Records. Sheen then wrote and composed it in the form of a song to give birth to `Inquilab.’ Prince Dhunna is a poet from Patti (Tarn Taran district). 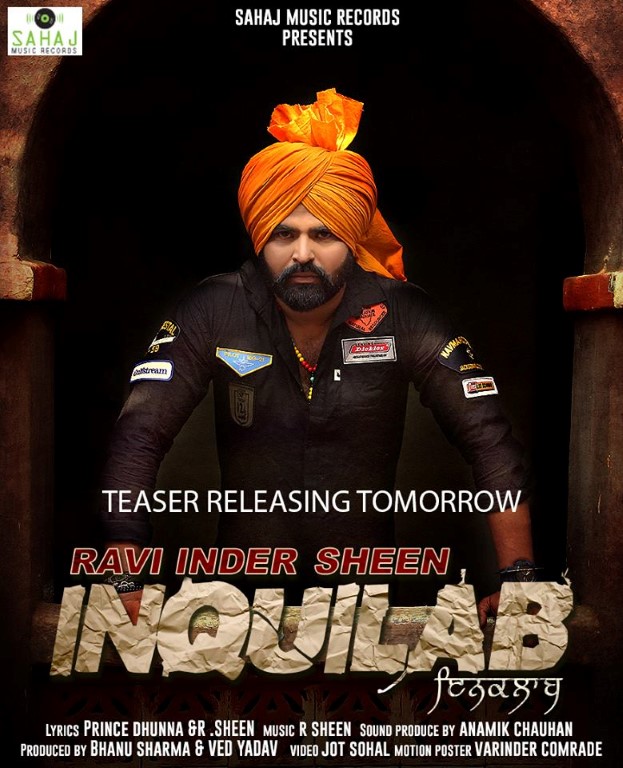 In an attempt to sensitise as many people as possible, the team will be travelling to cities like Amritsar, Jalandhar, Ludhiana, Barnala, Patiala, Ferozepur, Faridkot and Chandigarh to engage in conversations with people and hear their views about today’s Punjab. This not only will help people to think of innovative solutions to tackle today’s problems, but will also give the producers innovative ideas to come up with more songs on socially sensitive issues.

“Since we have planned to release one song every month, this initiative will help us in understanding the problems faced by the people living around us”, feel the producers.

Ravi Inder Sheen is a singer, composer, writer who has been associated with ‘different’ Punjabi cinema for almost a decade. He was the singer and composer in the international award winning film, Nabar, in addition to the recently launched film Saavi. He is now foraying into Bollywood, and is in talks with major producers

Sahaj Music Records is the brainchild of Bhanu Sharma and Ved Yadav. Sahaj recently launched single track Kulli Phoonk, which has over one million views on YouTube. Their second track, Inquilab, will be released on September 28, and they have an agenda of releasing one track every month.

Sahaj Music Records also produced the path breaking movie Saavi, the story of a woman who falls prey to the very old tradition of Batta-Satta. Bowing down to traditions and societal pressure, Saavi is bound to continue her life with the norms of the society.

The Gaddis & some labourer families follow the Batta-Satta system of marriage in which the bride’s brother has to marry the groom’s sister or vice versa. Batta-Satta is a Barter marriage system for sons to find brides. But every family does not have a girl of marriageable age to exchange; some marry off minors to keep their end of the bargain. Generally in such arrangements two families are involved, that is, a sister of a person is married to another person in lieu of his sister.

Love Shagun movie is ready to release on 11th March ’16