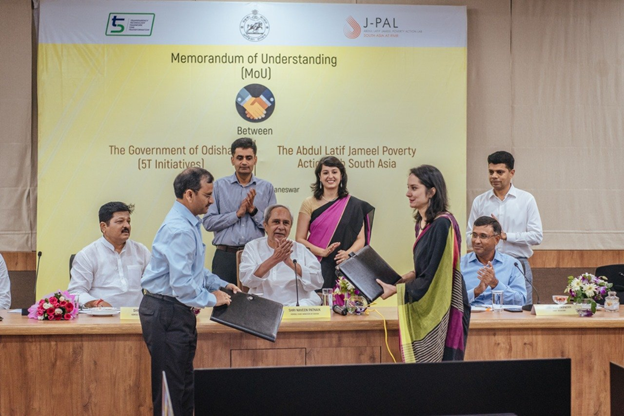 Under this partnership, J-PAL South Asia, which is hosted at the Institute for Financial Management and Research (IFMR) in Chennai, will provide technical assistance for the scale-up of evidence-backed programs to improve development outcomes.
The partnership establishes an overarching collaboration between J-PAL South Asia and the Government of Odisha under which J-PAL will work with several departments, including, but not limited to Labour, Education, Health, and Women and Child Development, to conduct policy-relevant randomized evaluations of new anti-poverty and development programs. Additionally, a diagnostic exercise and subsequent workshops will be conducted to build state capacity in the area of monitoring and evaluation.
The agreement was signed during a ceremony with the Honorable Chief Minister of Odisha Shri Naveen Patnaik, Global Executive Director of J-PAL Iqbal Dhaliwal, and Executive Director of J-PAL South Asia Shobhini Mukerji. Senior ministers and officers of the Odisha Government were also in attendance.

In his remarks, the Honourable Chief Minister of Odisha Shri Naveen Patnaik said, “I am delighted that a Memorandum of Understanding has been made between the J-PAL and State Government of Odisha with a focus on policy dialogue encompassing malnutrition, distress migration, women empowerment, agricultural productivity, and health sector issues. As a part of our 5T Charter it is our government’s endeavor to partner with those who set global benchmarks. J-PAL, co-founded by Nobel Laureates Abhijit Banerjee and Esther Duflo will also add great value to our transformation initiatives. I have been closely monitoring and look forward to the outcome of this partnership. The success we demonstrate will be a major step closer to my dream of an empowered Odisha.”

Iqbal Dhaliwal, Global Executive Director of J-PAL said “We are very grateful to the Government of Odisha for inviting us to work in the state. We are very impressed by the clear vision of the government for a transformative agenda, and its capacity to deliver as evidenced by the effective response to the cyclones. Our hope is to work closely with various departments on a journey to combine local expertise with rigorous evidence to inform policies that improve the lives of the poor.”

J-PAL South Asia and The Government of Odisha will conduct an annual Policy Dialogue to identify the Government’s top policy priorities, conduct discussions to share evidence, and jointly come up with innovative solutions that can be field-tested through rigorous randomized evaluations.