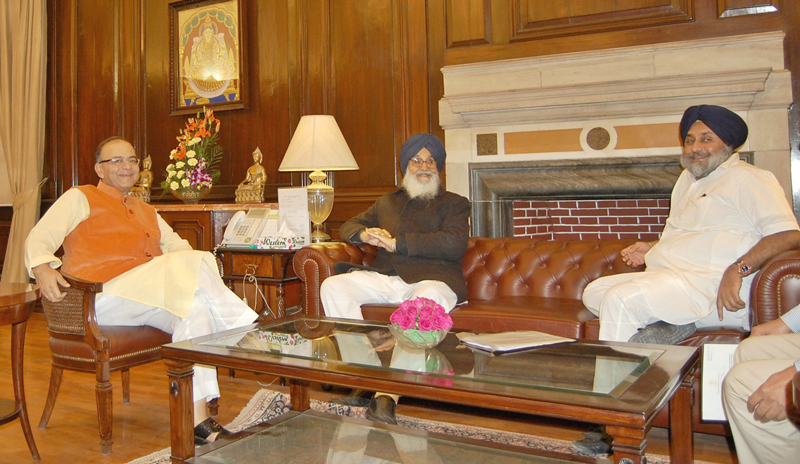 Taking the part in the deliberations during the meeting with the Union Finance Minister both the leaders informed Mr. Jaitley that these grants duly recommended by 13th Finance Commission, were already overdue for release and would subsequently lapse after 31st March, 2015. The leaders also solicited Mr. Jaitley’s attention to the fact that Punjab along with West Bengal and Kerala were treated as fiscally stressed states 13th Finance Commission. They apprised Mr. Jaitley that the 13th Finance Commission had recommended to the Government to help these States come out of the fiscal stress. The state continued to incur Revenue Deficit ranging from 3.5% to 1.2% of the GSDP during 2004-05 to 2014-15 except in 2006-07 when it showed a Revenue Surplus due to grant received from the GoI against the waiver of the Special Term Loan incurred for payment for central forces deployed in the state during militancy period.

Both the leaders requested Mr. Jaitley to at least provide the State some relief by reimbursing Rs.2684 crore repaid by the State against principal and interest of the Special Term Loan provided by the GoI during period of militancy. The rest of this Special Term Loan has already been waived, they remarked.

On the occasion, the Chief Minister also handed over a letter to Mr. Jaitley stipulating Department wise Grants recommended by 13th Finance Commission pending with GoI mentioned as under :

Responding to the issues raised by Chief Minister and Deputy CM, Mr. Jaitley assured them that he would direct the Ministry of Finance to ensure the timely release of these grants of Rs.283 crore without any further delay.