Relish the richness of Arabian cuisines at the Arabic food festival from 21st May to 31st May, 2016 at The Café@JW, JW Marriott Chandigarh

NewZNew (Chandigarh) : Mystical nights of culinary delights await the patrons of JW Marriott Chandigarh as they join the celebrations of “Arabian Nights” at The Café@ JW. As the name suggests, the all day dining restaurant at JW Marriott Chandigarh, is taking its patrons on a culinary voyage of Arabia, allowing them to relish the richness of Arabian cuisines through the “Arabian Nights” food festival from 21st May to 31st May, 2016.

Evolving over the centuries, the Arabian cuisine of today is an amalgamation of regional cuisines from across the Arab. These centuries old regional cuisines are inspired from the culture of trading in spices, herbs, and foods and use of the items traded in that particular region is prominently evident in its cuisine. 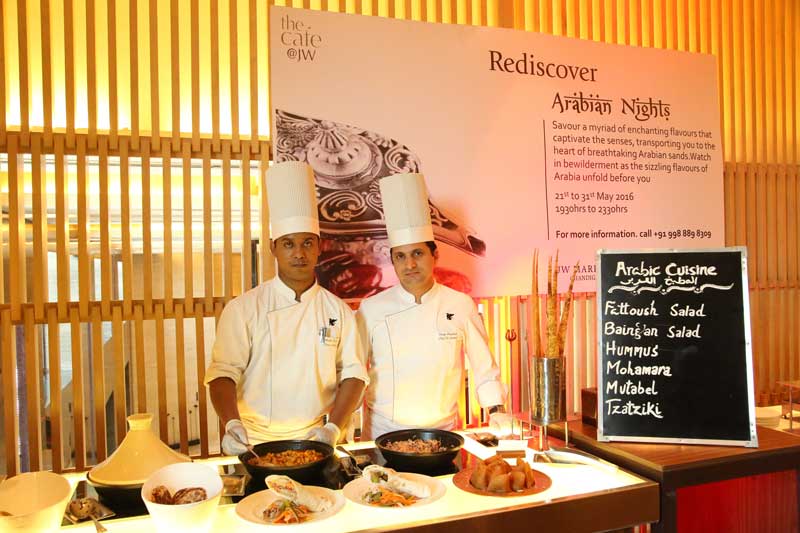 From May 21st to May 31st, 2016, the “Arabian Nights”, a thoroughly indulging dining experience will see choicest of Arabian delicacies being served for dinner at The Café@JW from 7:30 pm to 11:30 pm.

The Arabian cuisine can broadly be categorized under three main regions, the relatively young kitchens of Maghreb and Levant regions, and the very old kitchen of Khaleej region. These cuisines have many similarities, but also many unique traditions which have been influenced by the climate, cultivating possibilities, as well as trading possibilities of these regions. The “Arabian Nights” intends to bring together the best of all these regions in one menu for the guests to relish.

To welcome the guests, Labban, a traditional welcome drink will be served. Once settled, the guests will have the opportunity to order exquisite Arabic delicacies from the menu which has been set for this Arabic food festival at JW Marriott Chandigarh. The sumptuous Chicken/Falafel Shawarma which simply melts in the mouth will satiate the taste buds no ends. The Arabic Mezzes like tabuleh, humus and tzatski will leave you wanting for more. Adding to the experience is the Fish Tagine among others.

Adding sweetness to the whole experience will be the famous Arabic sweet dishes. Since no Arabic meal is complete without a good helping of sweets, the “Arabian Nights” will serve the patrons some authentic Arabian sweet delicacies like the Baklawa and Mouhlabia.

“Over the years, the Arabian cuisines have undergone refinement to cater to the changing culinary habits of the people but have still managed to retain their core traditional essence and old world charm. The “Arabian Nights” at The Café@JW will allow our patrons to relish authentic Arabian cuisines, bringing together the best of traditional Arabic recipes and modern refinements to give a wholesome experience of cuisines of Arabia,” shares Chef Naveen Handa, Executive Chef, JW Marriott Chandigarh.

Atul Malikram created his own way by making his own Dawn...