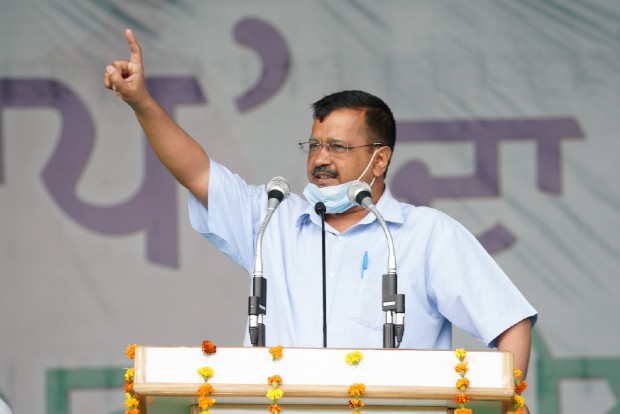 Addressing a large Kisan Mahapanchayat in Punjab’s Moga district, the Delhi Chief Minister said the party should get ready for the Assembly elections in 2022.

“You have one year’s time, reach out to every single person in Punjab and tell them how they have been cheated for several years on the pretext of false promises by both the Congress and the Shiromani Akali Dal (SAD). Keep a card higlighting the promises made by the ruling Congress in the last state Assembly elections in your pockets and remind the people while meeting them that they have been cheated. The people of Punjab voted for development, job, electricity and subsidised schemes, but Congress’ promises could not see the light of the day till now,” Kejriwal said.

The AAP convener also urged the people of Punjab to support the AAP in the next Assembly elections, saying that his party came to power with full majority in Delhi for two consecutive terms and within six years, the AAP-led Delhi government has effected many changes in education, health, electricity and other sectors.

Reiterating all the achievements of the Delhi government in the last six years, Kejriwal asked the party workers to set a vision for the people of Punjab.

Kejriwal also hit out at the Narendra Modi-led Central government for bringing the alleged ‘anti-farm’ laws in the agriculture sector. He expressed his gratitude to the farmers protesting against the three farm laws which were enacted in September last year.

Before addressing the Kisan Mahapanchayat, Kejriwal visited the grain market in Bagha Purana in Moga district.

AAP sources in Punjab claimed that before Kejriwal’s visit to Moga, the boards and hoardings of the party were removed by the civic authorities during the early morning hours for which the officials had to face the wrath of the AAP workers, who raised slogans against the civic administration.

Iconic Rotary Dinner in the Dark at Taj Chandigarh