“Vaadi-e-Kashmir”, a short film on Kashmir, a CSR initiative of KENT RO, dedicated to Kashmir on behalf of the Nation by Mr. Rajnath Singh, Home Minister and Ms. HemaMalini, Member of Parliament, along with Mr. Mahesh Gupta, Chairman-KENT RO Systems has been created by Law & Kenneth Saatchi & Saatchi. 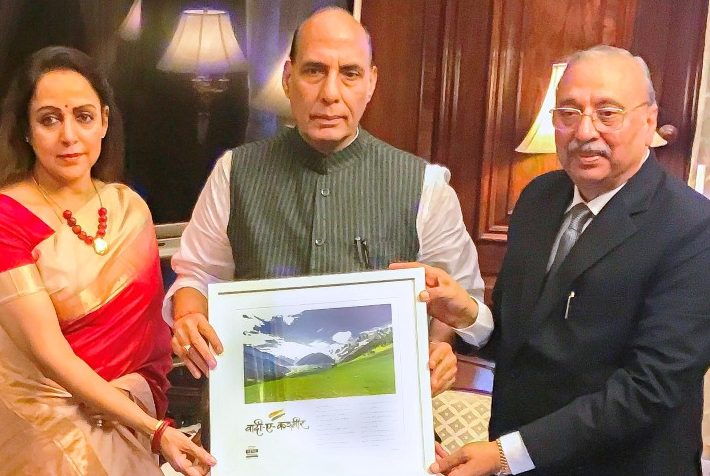 While dedicating this film to the nation Home Minister Rajnath Singh added “Kashmiris are an important part of the development of this nation. We wish to ensure a promising future for the people of Jammu & Kashmir’

This film showcases the warmth, oneness and love that we share with Kashmir and its people, and also serves up the magical slice of Kashmir that we all celebrate. The film is on air from today.

It endeavours to knit the people of Kashmir with the rest of the country in an open hearted, warm and compassionate message of togetherness. It is a joyful celebration of a diverse country that we inhabit, Kashmir included! The film splendidly appreciates the mesmerising beauty of the valley of Kashmir and its people.

Commenting on the film Mr. Mahesh Gupta, Chairman – KENT RO said, “The film celebrates the beauty of Kashmir and its people, and celebrates the love and togetherness that we share as a nation. The vision of this short 6 minutes film is to ‘make our brothers and sisters in Kashmir feel that the rest of the country stands with them’ and also open many more doors to bring us closer to each other.  It’s a simple film which carries a message of oneness, with Purity of Heart and Intent. Just like what KENT RO stands for, Purity. It is simple. It is not driven by any political or religious agenda. Instead it is driven by humanity and the sense of family & togetherness. India is a one big diverse family and Kashmir is an integral part of our lives. And we need to celebrate it.”

Ms. HemaMalini has been the curator of this film, working closely with Mr. Gupta, Mr. Kenneth and the team to ensure this message is captured and shared with the nation. Sharing her thoughts on this initiative she adds “Ye film mere ekbhartiye hone kenaate… hamarepyare Kashmir se judne… aurhamare Kashmiri bhaiyobehononkedilkochhoonekaekprayashai…”

“As an Indian, this film is my attempt to reach out to Kashmir and touch the hearts of our brothers and sisters in the Valley.”

The film conceptualised by Praveen Kenneth, Chairman – Law & Kenneth Saatchi & Saatchi, showcases the unadulterated beauty of Kashmir and its people. Connecting everyone in the country, the viewers will undoubtedly be left spell bound.  Praveen Kenneth adds “The task at hand, keeping in mind the current situation of Kashmir was challenging. We met a myriad of people, both in Kashmir and outside, to find a starting point. We had to keep it simple.Mr.Gupta and I believe, anything can be answered and any solution is possible, if there is a genuine connection between people. It’s the first step, to establish any possibilities. And we as a nation when called upon, reach out very easily across the spectrum of caste/creed/differences. That’s the beauty of this nation. And this attempt is our small contribution to create the platform to connect people.”

This 6 minutes short film, directed by the legendary film maker Pradeep Sarkar, is a scintillating way to build a bridge of hearts, between Kashmir and the rest of the country. Shot over a period of 2 weeks in Kashmir, Pradeep Sarkar has brought alive this “Paradise on Earth.”Narrating his experience of shooting this film, Pradeep Sarkar says: “Falling in love at the age of 62 years is possible… it happened to me when I went and met Kashmir!  Though it was my first trip to Kashmir, it seemed like I knew the place… the warm and friendly people just make you feel at home instantly. In this film I tried to capture her beauty… but I want to go back to capture her beauty unawares – and also to know her a little better… Believe it, we all need to know her a little better!

The film starts with an introduction by one of the most distinguished personalities in the country, Mr. Amitabh Bachchan. His powerful presence and message is enough to keep you hooked to the film. Also shot in the backdrop of beautiful valley of Kashmir with its stunning mountains, greenery and shikara, the video is uniquely fascinating while the youth of the country proudly showcase the love and bond. Furthermore, the outstandingly captivating song sung by Shankar Mahadevan and composed by Shankar/Ehsaan/Loy with lyrics written by Gulzaar, lifts the film and the message to a whole new level.

The film calls the viewer to log on to www.dilsekashmir.com, a platform that’s been created for the people across the nation to send a message of love to the people of Kashmir. It also showcases some amazing stories of the people in Kashmir, who have surmounted numerous challenges and stood tall. It is a must visit to see the State of Kashmir in new light.

This truly is an attempt at bringing beautiful Kashmir into the collective consciousness of the Nation and opening many doors to build togetherness and connection across the nation.

Trideal, Chandigarh based curated deals marketplace gets acquired by ‘Little’

Why did Harbhajan Singh cry on ‘Punjabiyan Di Dadagiri’?