The Great Khali made his shocking return and assisted Jinder Mahal to successfully defend his WWE Championship against Randy Orton in their Punjabi Prison match. With the Viper sensing victory, the Indian giant came out and rocked the outer cell to force Orton back in the prison. There, Khali choked Orton from the outside, allowing Mahal to climb out of the cell and win the match. 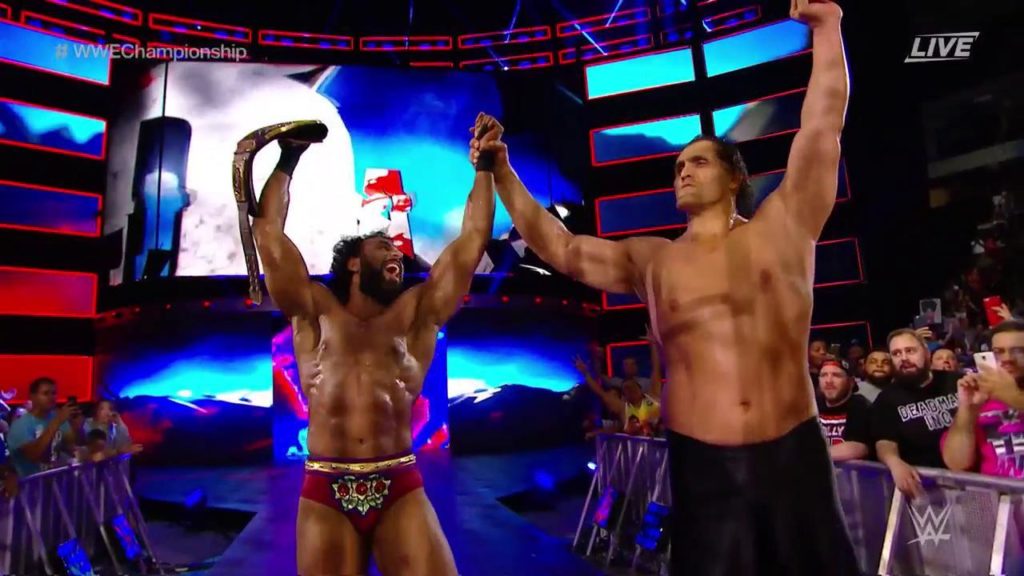 It was already a tough draw for Orton, with the Singh brothers interjecting themselves numerous times in the match but tried his best to fend off the interference. He even punched Samir Singh out of his way and forced the latter to crash to the announce table on the outside.

But the number’s gain was just too much to fight through, with Mahal keeping the title in his grasp.

In the night’s other matches, John Cena bested Rusev in their flag match, finishing his Bulgarian foe with an Attitude Adjustment on a pair of tables before erecting the flag of the USA on the podium.

The New Day became the new SmackDown Tag Team Champions, topping The Usos after Kofi Kingston nailed Jimmy Uso with the Trouble in Paradise, followed by Xavier Woods connecting with the Elbow Drop.

The Queen of Harts got her knees up on Charlotte’s moonsault and followed it with a small package to drive the latter’s head to the bottom turnbuckle, scoring the pinfall. Becky Lynch, Lana, and Tamina were also part of the match but got eliminated early.

Baron Corbin disqualified himself in his match against Shinsuke Nakamura, nailing the King of Strong Style with a lowblow before attacking him with his Money in the Bank briefcase and connecting with the End of Days in a post-match attack.

Sami Zayn gained a measure of retribution against Mike Kanellis, hitting the Helluva Kick for the three-count.