The convention aimed at addressing the rising concerns of environment related issues due to vehicular emissions and also the need for having proper engineering while constructing roads in India. According to India’s National Health Profile 2015, there were almost 3.5m reported cases of acute respiratory infection (ARI) last year, a 140,000 increase on the previous year and a 30% increase since 2010. 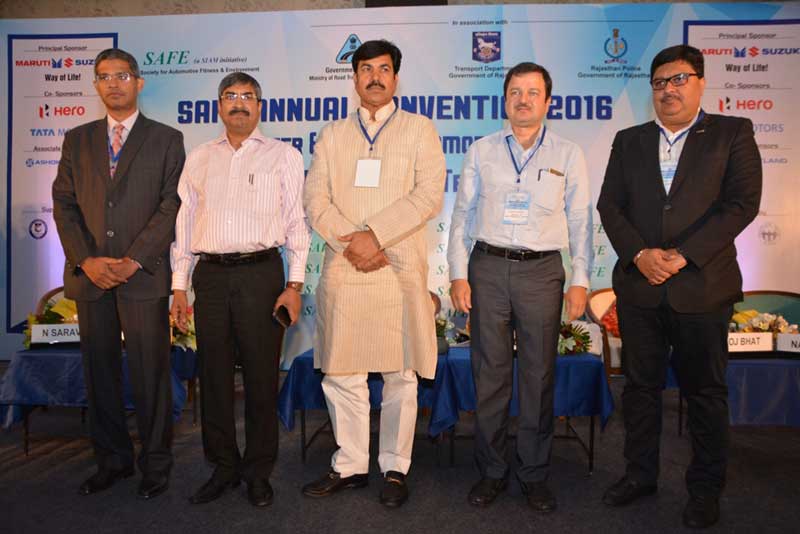 Speaking at the convention, Dr N Saravanan, President, SAFEsaid,“We have been working for last 17 years towards creating awareness on road safety by organizing campaigns across the country. SAFE shall work with key stakeholders and motor training schools to further help improve the environment”

Also Read :   IPL : All 6 skippers of teams to miss the Inaugural

“A lot has been done by auto manufacturers in reducing road fatalities, it’s now time for NGO’s and the media to work jointly in educating and also alarming people towards safe driving. SIAM has a commendable job bypromoting and supporting road safety education among school students” saidMr. AbhayDamle, Joint Secretary, Ministry of Road Transport, Shipping & Highways

Mr. Yunus Khan, Hon’ble Minister of Public Works & Transport, Rajasthan said “It is a positive sign that we have started to realize the importance of Road safety, nearly 1.38 lakh people died in 2014 due to road accidents. Automobile manufacturers should focus in setting up Motor Training Schools in different states to train drivers.”  He also requested automobile manufacturers to focus on spreading road safety awareness by assisting government in setting up driver training institute and inspection & maintenance centers in their respective states with the help of their CSR funds. It will be useful to reduce road fatalities in the country.

Also Read :   Save Time, Save money, Make your own wedding beautiful with Shaadi-e-Khas

The second session focused on Designing the Safer City with Traffic Planning. This comprised of insightful contributions Mr Ravishankar Rajaraman, Technical Director, JP Research India Pvt Ltd who gave an overview on “How Traffic Planning can reduce the accident incidences”. This session saw participation fromMr B S Yamgar, Dy. General Manager, Automotive Research Association of India, Mr Rohit Natekar, Assistant Vice President & Head of Sales, KPIT Technologies limited on Role of Technology in Safety and Cleaner environment who spoke largely on safety being a top priority and the need of traffic planning which will assist in safer and cleaner environment. The session closed with addresses on planning the traffic and infrastructure and also the role of technology in making roads safer and environment cleaner.

The final session comprised of a panel discussion moderated by Mr. K.K Gandhi, Executive Director SIAM, with experts in the area of Road Safety from Rajasthan, Maharashtra, Kerala, Punjab, Pondicherry and Gujarat. The panelists shared their thought on implementing action plan for Safety and cleaner environment.

Alexi Grewal’s story from a bullied school kid to a celebrity...

Garam Dharam all set to get launched by actor Dharmendra