Vodafone Foundation’s Tribute to Extraordinary Women and their Achievements 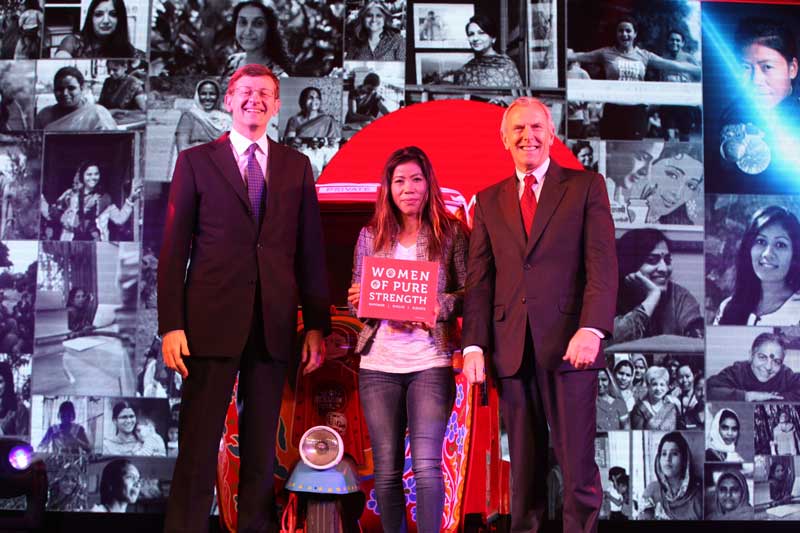 From Reena Sahariya’s victory in the Panchayat elections- the first ever for a woman from a particularly vulnerable tribe; to Meera Jatav’s newspaper- written, designed, and distributed by rural dalit and Kol women from Uttar Pradesh and Bihar; to collation of 50 disabled-friendly websites by Shilpi Kapoor’s largely differently-abled team; and lighting up an entire village through solar products retailed by Ajaita Shah’s social enterprise; the success stories featured in Women of Pure Strength  illustrate how astutely women can steer the mast amidst waves of diverse social and cultural milieu.

Speaking on the occasion, Vittorio Colao, CEO, Vodafone Group Plc. said, “Around the world, mobile telephony has transformed society, enabled economic development and fostered individual wellbeing. Women with access to mobile phones feel more secure, connected and empowered. They utilise its benefits to improve their own lives, and those of their families and community. Women of Pure Strength is our way of recognizing and applauding such achievements and achievers. My heartiest congratulations to all the women achievers present here today and featured in the book. This is our second book in a proposed series and reiterates Vodafone’s commitment to empowering women for catalyzing positive social and economic change. “

Chief Guest M C Mary Kom who is also featured in the book, said, “It is an honour to be a part of the movement for women empowerment, which is perhaps the mission statement for a new India. All the women featured in the book are real achievers whose stories will motivate several others for time to come. I thank the Vodafone Foundation for this pioneering initiative to raise awareness about the cause in such a unique way and wish them all success in future endeavours.”

The launch of Women of Pure Strength also marked the culmination of Red Rickshaw Revolution 2, Vodafone Foundation’s flagship campaign on women empowerment and reiterates its commitment to drive positive social and economic change. Red Rickshaw Revolution 2, a digital journey from Aurangabad (Maharashtra) to Kolkata (West Bengal), identified and acknowledged the achievements of 20 women sarpanches. To further support their cause, Vodafone Foundation helped set-up Digitial Community Information Resource Centres (dCIRCs) in their villages with the objective to empower the communities through access to relevant information in governance, agriculture and education.

[blockquote author=”Speaking about Vodafone Foundation’s focus on woman empowerment, Marten Pieters, MD & CEO, Vodafone India, said, ” pull=”pullright”]“We are fortunate to be a part of an industry that connects and empowers people, enables inclusiveness and furthers community causes. Empowering women brings in a strong multiplier effect with positive, sustainable impact on the entire society. For Vodafone Foundation, women empowerment is a key area of focus and it is working on several projects aligned to the theme in the areas of education, safety and security, health, livelihood and entrepreneurship.”[/blockquote]

In 2013 Vodafone Foundation launched the first coffee table book in its series on women empowerment – Women of Pure Wonder, which captured stories of India’s unsung woman heroes, met during the first edition of Red Rickshaw Revolution.  This second book, Women of Pure Strength, published by Roli books, continues the journey with new heroes.

How to prevent Facial Trauma?