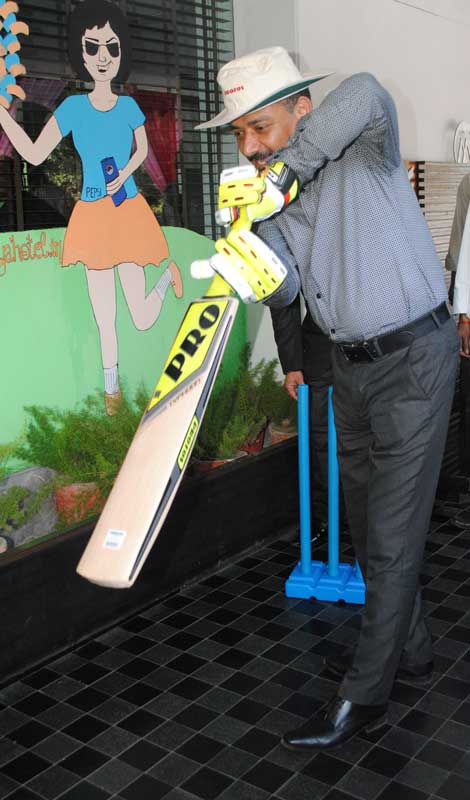 NewZNew (Chandigarh) : Chandigarh Mayor Arun Sood  donned  different cap today ,he  declared open The Royal Red Carpet T 20 Cricket fiesta by hitting cricket  ball bowled by Maya GM Rajesh Kalra . Fans/ Premium Maya Club members gathered at Maya relished T 20 Fiesta Cake that was formally cut by Mayor Arun Sood with GM Rajesh Kalra . The Indian T 20 squad  may lose their grip over the almost clinching victory but that  won’t deter the cricket lovers in the city to continue celebrating the season with craze and fervour. As  the sixth ICC World Twenty20 tournament comes to its business from March 8 , the city’s food lovers would be  rushing to relish the cricket-themed cuisines and packages that Buzz car at Maya Hotel  are offering in order to cash in on the T20  frenzy.

T-20 Fiesta is a concept based food festival we are launching at our Outlet, Buzzczar All day Dining. It is more like a festival that the city welcomes and embraces with joy. We wanted to make it special for the fans. We are organizing huge screenings for members and visitors in the Buzz Car and offered special food items with attractive

The bi-annual cricket fever that bewitched the sports-deranged city took a step further, as the love for the game went beyond the stands at the PCA and television screens at home. To ensure that the crazy fans are not devoid of the slice, Maya thought that it was now its turn to hit a score; for the T20 matches were soon fixed on menus and tables instead.

Join Newznew on Telegram
Also Read :   Traditional apparels get a modern twist at Weaves of India

“The T 20  is as important as any other One Day or Test Match  for the people of Tricity . It is more like a festival that the city welcomes and embraces with joy. We wanted to make it special for the fans. We organised huge screenings for members and visitors in the Buzz Car   and offered special food items with attractive discounts,” says Rajesh Kalra,  general manager, Maya Hotel.

Arun Sood City Mayor elated over unique effort of Maya to offer Royal Red Carpet treatment to Chandigarh’s Royal Cricket lovers said that  T 20 Fiesta  will make them as if they treated at Par  to  Red Carpet of Oscars.

To tap into the theme of cricket and T20, various food items named after the teams and players ruled the menus of our Buzz Car restaurant. While dishes like Royal’s Tandoori Aloo, Super King’s Stuffed Mushroom and Knight Rider’s Chicken tickled the taste buds of the customers at Buzz Car, liquor and beverages came down well with others.

Aditya , a pioneer member of the Maya Hotel Premium Member Club feels “this is a pragmatic way of attracting all age groups to the dining table… besides food… it comes across as a unique way of friends get together with new dishes on platter.”

“We will   name  our mocktails after the Indian team  players. It was centred around players like Mahendra Dhoni , where the mocktail would be named  Mahender Pinocola, Yuvraj Thandai  Similarly, we named the other drinks as well,” says our Master  chef  Chander parkash Mishra

If giving a new and unique touch to their recipes were not enough to satiate the customers, Maya would  also begin  offering them  attractive deals. The deals reached their peak on days when Indian team will  play a match.