Doctors at Fortis Hospital, Mohali save, Baby born prematurely at 24-weeks Survives all odds and becomes the first such baby of the Tricity

It is often said that miracles take place on the earth, and the miraculous escape of Preeti Sachdeva’s newborn daughter, Dorothy, stands testament to the same. The baby was born through C-section on August 12, 2017 at 24 weeks of pregnancy (4 months before the expected delivery date) and weighed only 670 grams at birth. “Her lungs were very immature, for which the ventilator support had to be started right from the delivery room. Thereafter, the baby was shifted to the Level 3 advance NICU of Fortis Hospital, Mohali. She required respiratory support for nearly 9 weeks before she could breathe on her own”, Dr. Sunil Kumar Agrawal, Consultant, Neonatology, Fortis Hospital, Mohali informed the media at the Chandigarh Press Club today. 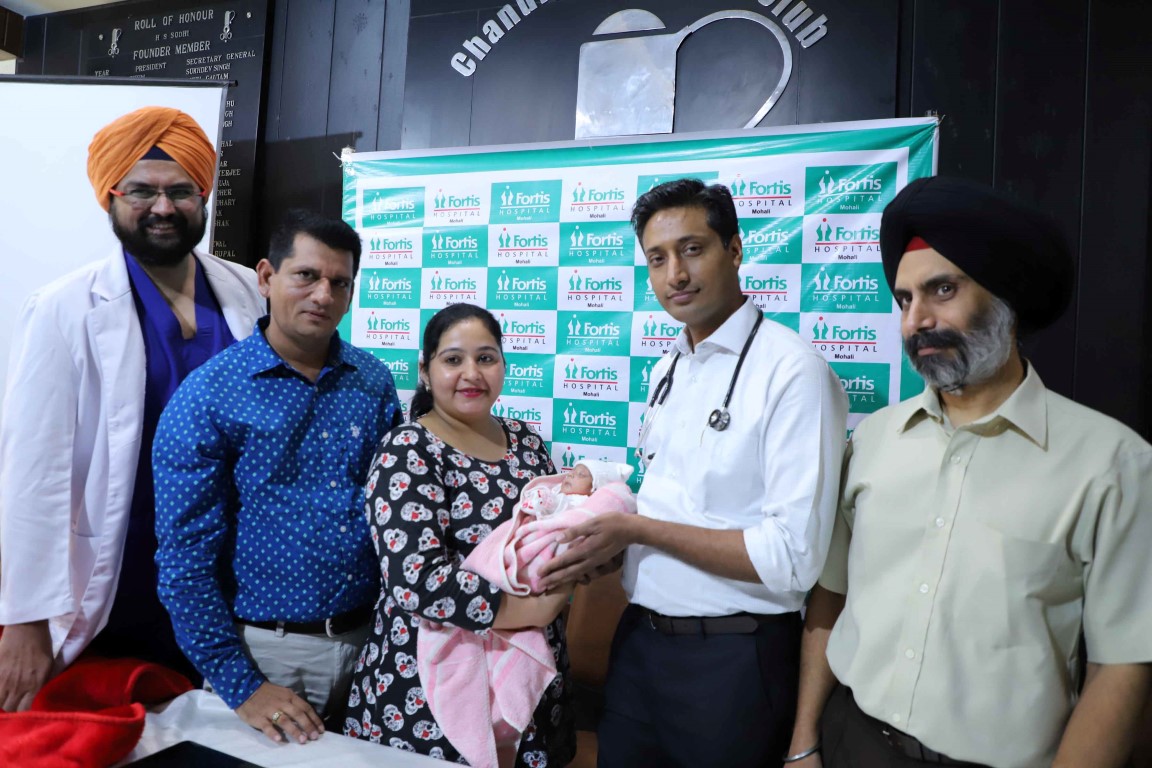 “At 24 weeks most of her organs were not formed properly. She had to be started on intravenous nutrition for 10 days before she could digest a significant amount of breast milk. Gradually, the condition of the baby improved and was discharged after 75 days of hospital stay. At the time of discharge, she weighed 1.4 kg. The baby was neurologically normal, accepting spoon feeds well, and her hearing & vision was normal. Most importantly, she had been blessed with the potential for a normal long-term neurological development”, the doctor further added.

Mr. Abhijit Singh, Facility Director, Fortis Hospital Mohali, said, “This is a girl child saved despite all odds. The fact that the parents have done their best to save their precious daughter speaks volumes. They came all the way to Fortis Mohali to ensure that she is given the best care once she is born. We are proud to have facilitated their little baby girl’s miraculous escape.”

During her interaction with the media, Ms Preeti said, “Our baby was 670 grams and continued to lose weight after birth. She had to be kept in Neonatal ICU and we were fretting her future. Dr. Sunil Agrawal assured us that she would survive. His belief that he would send a healthy baby home kept us going. The staff is very empathetic and cared for our daughter as their own. I feel “dil se” that we made the best decision having our baby at Fortis.”

Father of the child, Praveen Kumar has a small spinning mill business in Samana. He travelled by bus daily for 75 days even for delivering a small milk feed. They already have a 10-year-old daughter who studies in Patiala.

Babies born between 22-24 weeks of pregnancy are considered as babies born at the limits of viability, as they may not exist independent of the mother prior to this. But with advance technology and medical care, such micro preemies babies can be saved, that too with a normal neurological outcome. Most premature babies succumb to infection or sepsis during their long ICU stay, which occurs primarily because of lack of proper hand hygiene, use of unsterile equipment and inadequate NICU cleaning practices. However, such babies need long-term follow up for their growth and neurodevelopmental assessment. And they usually need periodical check-ups till the age of 3-5 years.

“The baby of Preeti as she is now called with affection across the hospital is now healthy. She has the sweetest smile. We are proud that this is the first 24-weeks baby to have been saved in the Tricity.” added Dr Agrawal.