NewZNew (Chandigarh) : Mona Townships Pvt Ltd (MTPL), one of the leading real estate developers in the region, has taken upon itself the task of promoting causes which contribute to the betterment and growth of the society. 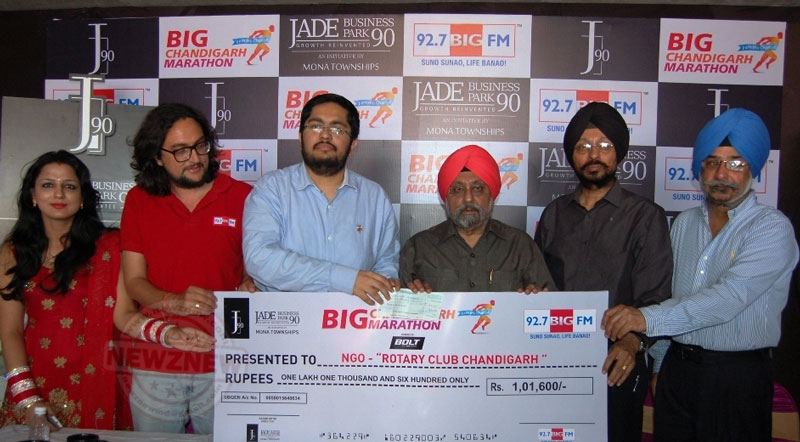 MTPL today donated Rs 1 lakh to Rotary Club, Chandigarh, an organisation devoted to social welfare. Mr Sagar Setia, Director, MTPL, handed over a cheque for Rs 1 lakh to Mr Paramjit Singh, President, Rotary Club, Chandigarh, at a ceremony held at J90, a mixed-use project of MTPL in Mohali. This money was collected through voluntary donations from participants of the “J90 presents Big Chandigarh Marathon”, which was organised in Chandigarh on March 15, 2015.

Sharing his vision, Mr Sagar Setia, Director, MTPL, said, “Apart from creating world-class structures where people can live, work and grow, we at MTPL strive to build around them a world which is full of positivity, hope and goodness. Our idea behind such efforts is to ‘Reinvent Growth’ in the sense that the society evolves in a positive and holistic manner, thus shaping a better tomorrow. We feel Rotary Club is an ideal organisation to partner with to further this cause. This donation, contributed by the tricity’s large-hearted residents, is yet another step towards the betterment of the society.”

On March 15, Chandigarh played host to the “J90 presents Big Chandigarh Marathon” which saw a participation of more than 8,000 people who made voluntary contributions meant to be given to Rotary Club.

J90 is an upcoming state-of-the-art mixed-use project launched by MTPL in Sector 90, Mohali. The underlying theme of the mixed-used development is “Growth Reinvented”, as also reflected in the motto of the project, “Live, Work, Grow”. The mixed-use project allows people to live in a residential apartment and own an office space in the same complex, thus providing them a sound environment to grow.

The “J90 presents Big Chandigarh Marathon” was part of the “I AM THE CHANGE CAMPAIGN” which was organised in Chandigarh recently. MTPL had partnered with 92.7 Big FM for conducting the five-week “I AM THE CHANGE CAMPAIGN” where each of the five weeks was dedicated to highlighting a different social issue. Through this campaign, MTPL was able to ignite a fire among tricity residents to work towards “reinventing growth” of the society, growth which is healthy, holistic and positive.

MTPL, as a people-centric organisation, is its customers’ companion. It not only wants them to feel safe, secure and happy in the structures it builds for them but also wants the world outside them to be as safe and secure. This is the thought which drives MTPL to go the extra mile to support socially relevant causes like the “I AM THE CHANGE CAMPAIGN” and partner with organisations like Rotary Club.