Home Breaking News Much awaited Punjabi thriller ‘Once Upon a Time in Amritsar’ to be...
Facebook
Twitter
WhatsApp
Email
Print
Telegram 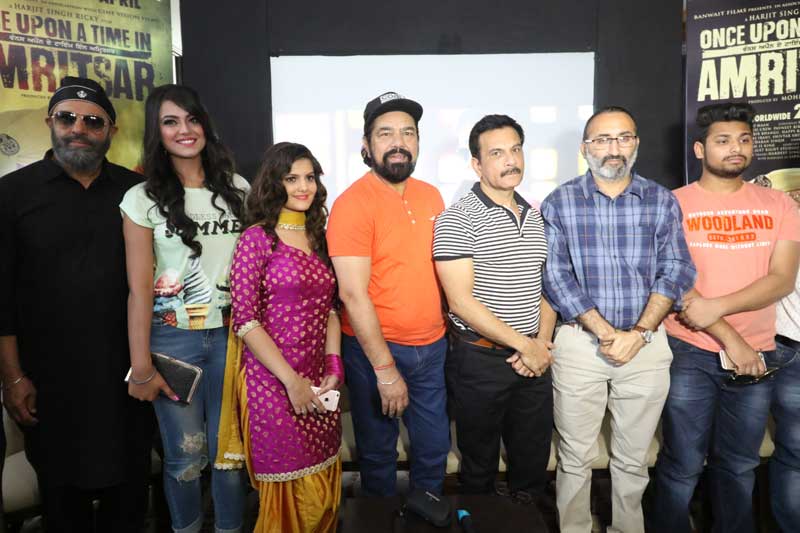 Talking to the media persons, Pavan Malhotra said, “Every mortal being strives to understand his purpose in life. While a lucky few are able to clearly comprehend their role on this earth, the rest of us are always striving to find our path, do our bit for the big picture. Have you ever imagined what would it be like if your quest for your eternal goal took you on a path that sets life spiralling in action? That is what the plot of ‘Once Upon a Time in Amritsar’ is like.”

Dilpreet Dhillon, the singer turned actor remarked, “This is a thriller which will be etched in the memory of the audiences for times to come. Working with such a creative team and on such an interesting story has been a rewarding experience.” Tanvi Nagi, the lead actress expressed delight for being a part of the one of its kind movie. She said, ” I am thrilled to the core and I am sure the audience will feel the same once they watch the movie.”

The story is about a young lad who sets out to Amritsar, the holy abode of sikhs, in search for the ulterior motive of his life and asks the Satguru to direct him towards the fulfillment of that motive. After seeking the blessings of Almighty at the Golden temple, just as Dilpreet along with his family is about to return home, fate rolls the dice and Dilpreet’s life undergoes a twist. The movie encompasses his struggle to grasp the larger essence of this twist of destiny. This intriguing movie keeps you on the edge of your seat and maybe labelled as one of the most phenomenal thrillers Punjabi Cinema has witnessed.

Harjit Ricky, the Director of the movie said, “The movie is a tale of every person who strives to find their purpose in life. The fast paced thriller is sure to leave the audiences spellbound.” Harjit Ricky has directed popular Punjabi movies like Jatt Airways and Sirphire .

“The movie is a fresh chapter in the book of Punjabi Cinema. I am positive the people are going to love this fast paced and engrossing movie”, said  Mohit Banwait, the youngest producer till date in Punjabi Cinema.

The movie is due to be release worldwide on 29th April 2016. So put on your seat belts and gear up for this thrilling journey with awe- inspiring twists and turns that will set your adrenaline levels soaring.

Also Read :   How to do Facial & Hair Care in this Rainy Season by Dr. Naresh Arora & Dr Neeti Arora