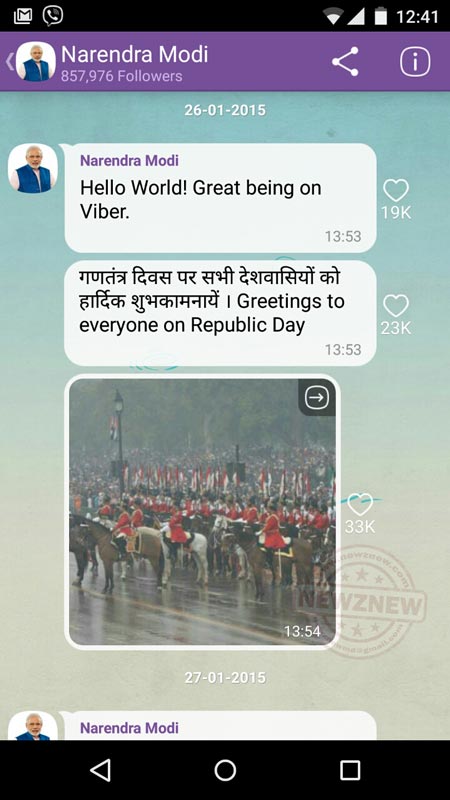 Being one of the most influential personalities on the internet, Prime Minister Narendra Modi has been reaching out to billions of his followers and fans through some of the most popular social media platforms. However, Viber Public Chat in its unique way is Mr. Modi’s first ever presence on an Instant Messaging app.

Prime Minister has been using social media to showcase various projects and initiatives undertaken by the Government of India and motivate people to serve the nation through campaigns like Swachh Bharat Abhiyaan, Jan Dhan Yogna, & Budget Updates.

Launched last year, Public Chats allows users to discover, share and follow live discussions from a wide variety of known personalities, celebrities and brands across genres like music, sports, politics, fashion, entertainment and more, using the familiar interface of the instant messaging platform. Anyone on Viber can follow these chats on their mobile device. Conversations are multi-media and include text, photos, audio, video, stickers, web links and more. Users can invite friends to follow the Public Chats that interest them and can share content.

[blockquote author=” said Anubhav Nayyar, Country Head, Viber India.” pull=”pullright”]”We are extremely honoured to announce that Prime Minister Shri Narendra Modi’s Public Chat has become the biggest Viber Public Chat in India within a month of its launch. Being one of the most influential personalities on social media, Shri Narendra Modi has been continuously encouraging the use of digital platform”[/blockquote]

“Viber Public Chat has opened up a complete new channel of communication between people and PM Modi. It gives people the opportunity to receive live updates on the day to day activities, campaigns and personal views of our Prime Minister right on their mobile handsets. The launch of Viber Public Chats has been one of the most significant developments at Viber bringing an altogether new social media platform for our users. The response so far from our users has been overwhelming”, he further added.