Not Every Headache is a Migraine and Needs Treatment: Patient Vivekanand, a 42-year male had a history of episodic headaches associated with visual symptoms suggestive of aura for the last few months. 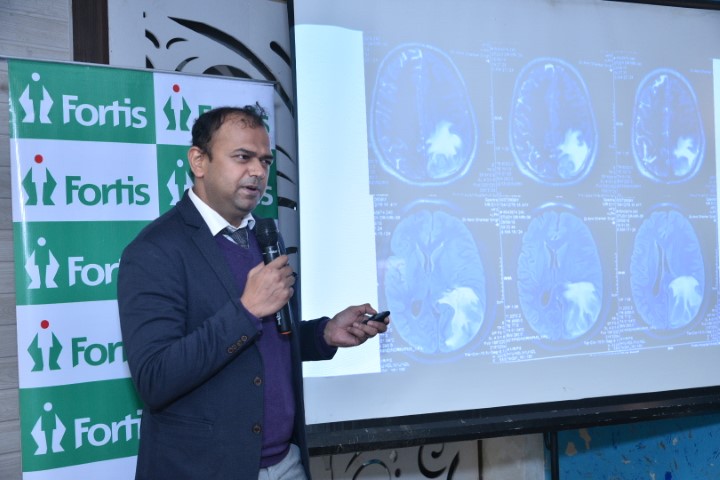 These headache episodes were characteristically similar to migraine with aura. He was taking anti-migraine treatment for these headaches but headaches were persisting. One day he also developed abnormal jerky movements of one side of the body for which he was brought to Fortis Hospital, Mohali in an emergency.

The patient was evaluated in detail by Dr. Amit Shankar Singh, Associate Consultant Neurology, Fortis Hospital, Mohali. The patient told him that he was taking oral steroids for Sarcoidosis (Sarcoidosis is a lung disease for which steroids are given). An urgent brain MRI was advised and to the surprise, the patient had three big round abscesses in the left side of the brain.

Dr. Amit told patient’s family that the headaches which he earlier had were not migraine but due to these big abscesses in the brain and visual problems were due to their location in the visual part of the brain. Possibilities of the tubercular or bacterial abscess were thought and treatment initiated. But patient’s condition further worsened and he developed right-sided weakness of the body in a couple of days. Repeat MRI brain suggested, that swelling around the lesion had increased and was compressing vital parts of the brain due to which he developed weakness.

The patient was immediately operated on by the neurosurgery team of Fortis Hospital, Mohali and pus was drained from one large abscess releasing the pressure. This pus was sent for examination at Fortis lab and a very rare growing organism ‘Nocardia’ was observed in his brain. Nocardia has mixed features of fungus and bacteria and can grow in immune-suppressed individuals like this patient as he was on steroids. The patient was put on appropriate antibiotics and he recovered slowly yet completely after treatment for around 3 months.

Dr. Amit told that unknowingly, sometimes migraine is considered to be the cause of headaches in most of the patients, but on detailed evaluation, some other disease is diagnosed rarely. This patient was lucky that his illness was diagnosed timely. Also, Nocardia brain abscess has a high mortality, but with proper care and treatment, the patient fully recovered. His MRI brain has also improved, but he still has episodes of headaches with visual auras due to residual scar left in the brain.

Another patient who was treated by Dr. Amit Shankar Singh at Fortis Hospital, Mohali was a 64-year-old male with the right head episodic electric current like headaches. He was referred to the headache clinic at Fortis Hospital, Mohali for management of these very debilitating headaches. He also had redness and tearing from his right eye. Such types of headaches fit in the Trigeminal autonomic cephalalgias (TACs) group, where unilateral headaches with autonomic features like redness and tearing from eyes are present.

Dr. Amit, who is running headache OPDs in Fortis Hospital Mohali told that Migraine and TACs are commonest debilitating primary headaches in the local population of North India.

He told that migraine is very common and can be identified with the following features:

He also told about multimodality treatment for the Migraine at Fortis Hospital, Mohali and ruled out the myth that migraine cannot be completely treated. TACs are a rare group of headaches and can also be treated with medical management. Finally, he stressed that these primary headaches like migraine and TACs always need to be carefully differentiated from Secondary or Symptomatic headaches caused by infections, clots, or Tumors.