The lives of two couples turned upside down recently when they their babies, born prematurely, started to develop life-threatening medical conditions. 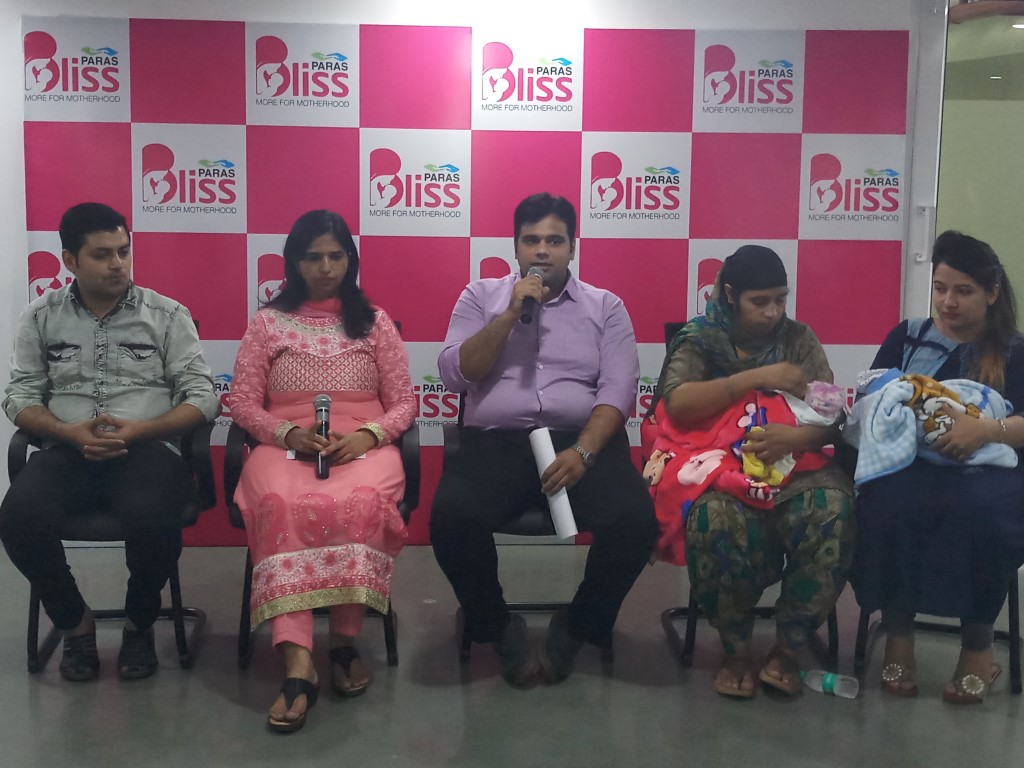 In one of the two cases, a baby boy was born in Ambala,preterm after just 30 weeks of gestation. The delivery was further complicated by the passage of stool inside the uterus which the baby aspirated. Thereafter at birth the baby required active resuscitation. However, the baby had severe difficulty in breathing. Upon receiving a call from the parents, a team of doctors and medical experts from Paras Bliss Hospital-Panchkula was rushed to Ambala but by the time the team could reach, the condition of the baby worsened and he even had a cardio respiratory arrest in front of our team and the baby was resuscitated efficiently according to standard guidelines (NALS). The baby was transferred safely to our NICU.

Dr Jyoti Chawla, Senior Consultant Paediatrics, Paras Bliss Hospital Panchkula said “Although the baby had a stormy course in the NICU due to various complications including “Hyaline membrane disease, severe infection, brain hemorrhage (IVH), PDA, seizures, and apneas”. The baby required highest level of ventilation due to further deterioration in respiratory condition. The baby was also put on drugs to increase blood pressure. Finally, his condition started improving; however, ventilator was still required with decreased settings. After extensive medical care given at the hospital his condition started stabilizing. The baby was managed well by our team despite all odds and the baby was saved with normal neurological examination at discharge. The baby is under our regular follow up for growth and developmental assessment and his parents are also educated about the program up to 5 years of age”.

Dr Manu Sharma, Consultant Neonatology, Paras Bliss Hospital, Panchkula said “In an independent case, a premature baby boy in Una in Himachal Pradesh was born at 30 weeks of gestation and weighing just 1.4 kg.  “We received a call as late as 7 days post-birth for this baby when the condition of the baby was already critical. The baby already had a cardio respiratory arrest at its primary center. On evaluation by our team it was found that the heart rate of the baby was fluctuating and blood pressure was not recordable and in front of our team the baby again had a cardio respiratory arrest. However, the baby was revived efficiently. Thereafter the baby was brought to our hospital safely and admitted to NICU, where the baby was kept on a ventilator, antibiotics and supportive medication to maintain blood pressure and heart rate. However, his condition worsened, as the baby landed into disseminated intravascular coagulation, which is characterized by systemic activation of blood clotting resulting in bleeding from different sites e.g. lungs, brain, and stomach. Reports also suggested severe blood infection and meningitis or brain infection”.

Also Read :   A Boxing based Talkie is all set to drive-in the Punjabi Cinema!!!...”Kirdar-E-Sardar”

The ventilator settings were optimized and targeted antibiotics were given to the baby. Blood transfusions were also carried out. The baby gradually responded to the treatment and started improving, and soon feeding was also started.

Upon satisfactory recovery, the baby was discharged after 31 days of stay at the hospital.

Both the babies were brought in at almost the same time to the hospital and were discharged on 29th August 2017. They are in regular newborn follow up of the hospital and will be subjected to MRI on 2 months of age. The hospital will follow the baby up to 5 years of life for neurologic development.

India has the most preterm births in the world, with reportedly 3.5 million premature births every year. Preterm birth is referred to a premature birth condition where the baby is born at fewer than 37 weeks of gestational period. The mortality rate of preterm babies is high in the country. Reportedly, it is the leading cause of death among children under the age of 5 years, responsible for nearly a million deaths every year world over. The management of preterm birth cases is medically highly challenging due to under-developed organs and therefore suffer from infections, jaundice, problems in kidney, breathing, heart, brain, and various other medical complications. Treating small babies is an immense and highly delicate challenge for any medical practitioner.

As the country deals with the high mortality cases of preterm of babies, these cases provide a ray of hope for many, along with bringing in the focus of proper pre-partum healthcare and regular check-up for the mothers to deal with such cases better.