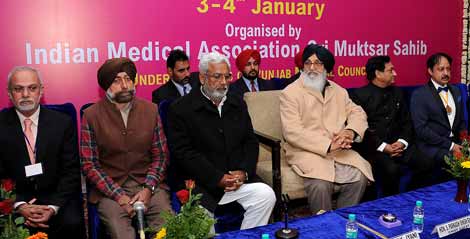 NewZNew (Sri Muktsar Sahib) : Batting for a joint effort by the Union and state governments to tackle the drug menace in the state, the Punjab Chief Minister Mr. Parkash Singh Badal today said that it was the need of the hour for making Punjab a drug free state.

Interacting with the media persons on the sidelines of annual conference of Indian Medical Association (IMA) PIMACON- 2015 here today, the Chief Minister said that all out efforts by both these governments along with the active support of the general public could help in eradicating the curse of drugs from the state. He said that the state government could only seize the drugs coming to Punjab via border but the need of the hour was to cut the supply line of drugs, for which the centre needs to enhance vigil on the borders. Mr. Badal said that Punjab was leading the country in seizure of drugs but this problem could not be solved until and unless its supply line from both across the border and within the country was not cut totally.

Asked to comment on Leader of Opposition Mr. Sunil Jakhar’s visit on Fazilka border to meet the BSF officials, the Chief Minister said that the Congress leaders always pretend to respect the security forces whereas the Shiromani Akali Dal (SAD) admire these forces from the core of heart. Mr. Badal reiterated that the proposed protest of SAD at Attari, Hussainiwala and Sadki was not against any central agency but it was meant for awakening the people of state against menace of drugs and for cutting its supply line from across the border. “The sole aim of our protest is to awaken the people against this menace so that its supply line can be cut from across the border” he added.

Earlier addressing the delegates of PIMACON, the Chief Minister said that in a bid to make the people aware about the benefits of good health, the state government was mulling to create a separate department for Healthcare awareness in Punjab. Mr. Badal said that he had asked the Vice Chancellor of the Baba Farid University of Health Sciences to explore the feasibility of constituting such department so that people could be made aware about how to keep a good health through massive awareness campaigns. He said that these campaigns must be launched at village level so that people could be benefitted from it.

In another significant move, the Chief Minister also announced that the state government would annually bear the expenditure of five private practitioners, who wanted to upgrade their expertise by conducting training in foreign countries. He said that these Doctors would be selected every year by a committee of Officers of the state government, representatives of IMA and VC of Baba Farid University. Mr. Badal said that this would enable the Doctors of the state to upgrade their skill to serve the people of the state. “We were already sending Doctors from the Government sector for such courses and now we have decided to extend this facility to the private practitioners also” he added.

Lauding the philanthropic service rendered by the IMA from time to time, the Chief Minister said that the doctors were serving the ailing humanity in a real sense. However, he exhorted the Doctors to serve the people far more zealously and sincerely by dedicating atleast one day of the entire week for the service of poor and needy. Mr. Badal also urged the leading private practitioners to adopt a cluster of villages around their hospitals to treat the people free of cost.

On the occasion President of Punjab IMA Dr. Sudhir Raj, while welcoming the dignitaries to the event, assured the Chief Minister that the organization would extend fulsome support and cooperation to the state government in its ongoing war against the menace of drugs.

Kids vaccinated on First day of Sub National Immunization Round