Poster of film ‘Aanya’ launched: Hindi feature film ‘Aanya’ under the banner of BS Entertainments, Mohali will soon hit the screens in various theaters across the country. 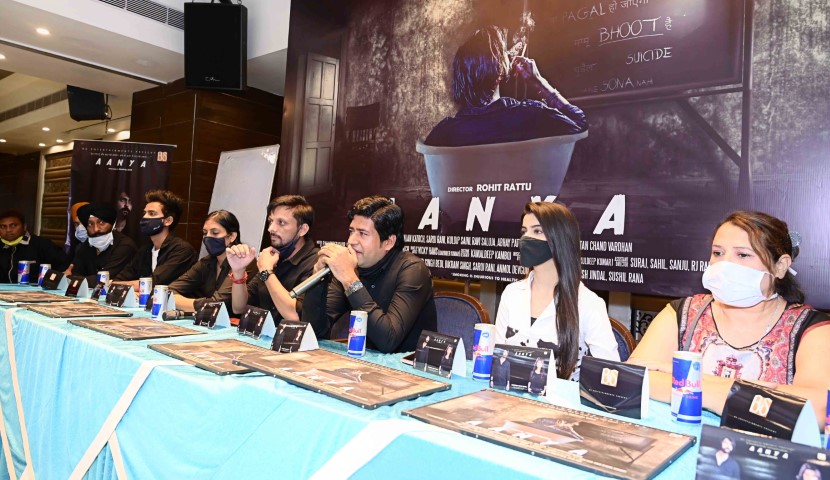 The film will be made within 35 days and the shooting of this film will start in the coming August. This was stated by Rashpal Brar, Managing Director and Producer of the film, BS Entertainments and Rohit Rattu, director of the film, in a press conference organized here today.

On this occasion, BS Entertainment’s Managing Director and producer of the film Rashpal Brar and the film’s director Rohit Rattu also launched the poster of the film ‘Aanya‘, during which they were accompanied by the film’s story writer Palwinder Kaur, co-producers Brikam Singh, Baljinder Singh Bedi, Saroj Rani, Anmol Devgan, Ramesh Jindal, Dilbagh ‘Arohan’, Sushil Rana and the actors playing the lead roles in the film are actress Gunjan Katoch and actor Mohit Jagotra were also present.

Giving information about the Hindi feature film ‘Aanya‘ on this occasion, Rashpal Brar said that most of the actors in the film are new, who have been given a better platform by BS Entertainments considering their future.

He congratulated his entire team for their cooperation in preparing this film. He told that the story writer of the film is Palwinder Kaur who has immense writing experience and the story of the film written by her will keep the audience hooked till the end of the film. The film will soon be released simultaneously in different theaters across the country.

He informed that the shooting of the film will be done in different parts of Himachal Pradesh which mainly includes Shimla and Delhi NCR whose direction has already been decided. He told that the duration of the film is only 2 hours 15 minutes and this film will be ready within 35 days. There are 4 songs in the film, the lyrics of the songs are by Harvinder Singh in which music is given by Sajan SP.

On this occasion the story writer of the film Palwinder Kaur who is also a well-known writer and motivational speaker said that the story and script of the film has been written in a thrilling manner so that the audience keeps watching the film till the end.

The film becomes thrilling it takes new turns one after the other and this will add to  the excitement among the audience. “It is a heart-touching, and thrilling Hindi feature film that I have written so that it can prove to be an entertainment film”, she added.

“After the film is made, I will also give it the form of a novel so that its story reaches all the people. I am very excited to see the film on my script and would like to see it soon. I got a lot of motivation from Rashpal, who is the producer of this film and everyone appreciated my work. You too must watch this film and give your feedback”, she added.

Actor Gunjan Katoch and actor Mohit Jagotra who are playing the lead roles in the film said that the team at BS Entertainments has given them an opportunity to work in this film. She said that she is very excited to do the film and the audience will love her work in the film.

They thanked Rashpal Brar, the producer of the film ‘Aanya’ and director Rohit Rattu, and said that the film is very thrilling and will give a new perspective to the thinking of the audience.

S A S Nagar will soon become the first district of...