With  Punjabi  cinema  reaching  heights of progress and prosperity with every new release, Canam Movie Production is gearing up to release a family movie for Punjabi film lovers. A press meet was organised by the film’s star cast & crew to unveil the movie’s  poster and to share details of this film, this Punjabi film is set in the 70’s. Producer Mike Verma and Director Shivamm Sharma, along with the star cast & crew of the movie participated in the conference. 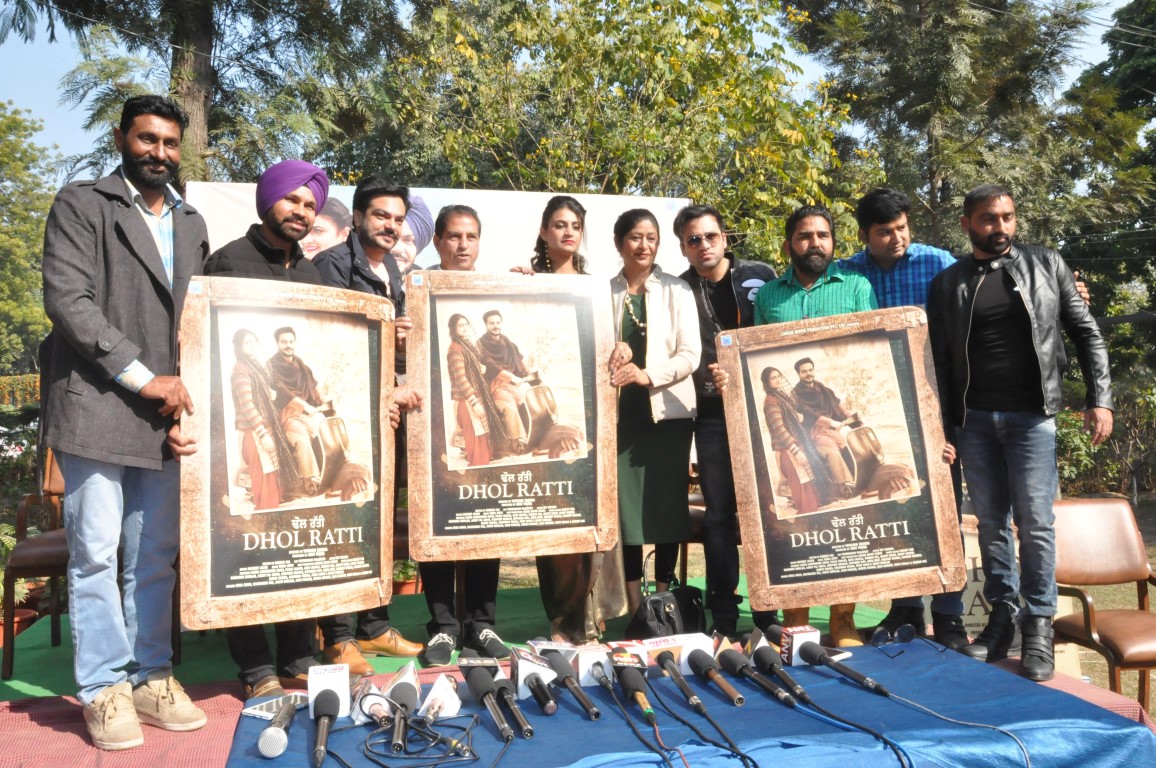 “In the modern era, where people are excessively inclined towards Western culture, this movie is an effort to connect them to their roots. We will be releasing the film soon and there is another Punjabi film project which will start soon after the release of this film under the Banner of Canam Movie Production.” Informed by Mike Verma, the Producer.

‘Dhol Ratti’ is a period film set in a scenario of Punjab in 70s, the writer & director have presented the culture & traditions, family values and the way people used to live in Punjab few decades back quite well. Cinematographer, Vishwanath Prajapati has left no stone unturned to set the scenes in their best possible way to recreate that bygone era.

“The theme of the movie encapsulates an emergency situation on the Punjab-Pakistan Border and how people manage it, the movie is based on the importance of family relations and moral values. In other words, it is a portrayal of the old Punjab.” Said Shivamm Sharma, Director.

Present from the star cast was the Lead Actor -the famous Lakha Lakhwinder Singh an established theatre actor, who apart from a number of Punjabi movies has also worked in a Hindi drama movie- ‘31ST October’ with Soha Ali Khan. “The film will present content which will be such that the entire family can enjoy it together. There is no vulgarity in the movie.” Said Lakha Lakhwinder Singh. Punjabi & Bollywood film actress  Pooja  Thakur is playing a lead role in this Punjabi movie. She has already done great performance in Bollywood films as well. Her upcoming films will be in different regional languages as well as Bollywood industry. Pooja takhur also emphasized  “It was a great experience shooting this Punjabi film. I am happy that a realistic setting has been created in all scenes of Punjab in the 70’s. Music is foot tapping & there is a very high level of comedy depicted in the movie.”

Another lead actor in the film is , Arsh Chawla this gentleman has made an entry to the Punjabi film industry with a bang. Playing a crucial role in Dhol Ratti, he will make the audience emotional. Arsh said to the media “This film is one of a kind, after a long time family’s will enjoy a beautiful picture where people can relate to their past.” Arsh Chawla’s  upcoming film Udeek Releasing Feb 2 2018 is going to be a super hit. Also releasing this year is film Taveet, and newly announced film Hero Paji will go on floor in March. Apart from the above leads  Malkit Rauni, Harby Sangha, Harinder Bhuller, Amritpal Chotu, Gurpreet Bhangu, Rupinder Rupi, Anita Meet, great pillars of Punjabi film industry have performed their roles well  in this Punjabi film. Gurmeet Dhaman,Randeep Bhangu, Kushboo Verma have also performed quite well in their supporting roles.

Harbby Sangha known for his role in movies like ‘Carry On Jatta’ ,’Bambukat’ and ‘Romeo Ranjha’ was also present . He has also performed one of the main roles in the movie & interacted with media.Actress Anita Meet, who played Kareena Kapoor’s mother’s role in the movie ‘Jab We Met’ is also acting in the movie & was present at the press meet. Writer of the film Babbar Gill was also present and addressed the media as well.In the upcoming film the viewers would also get an opportunity to enjoy the acting skills of Malkit Rauni  a great Punjabi actor who has supported in many Punjabi films.  Gurpreet Bhangu, an Indian actress who starred in Bollywood movie Mausam(2012) and Punjabi movies like Nikka Zaildar 2 and Singh Vs. Kaur is also there in the film.

Also Read :   People Sans admin experience could be potently dangerous for the Welfare of the State says CM Punjab

The music is given by Tanuj Jaitely and Ravi Pawar. The famous  singers like Mika Singh, Nachhatar Gill, Surjit Bhullar, Ashu Punjabi, Sudesh Kumari, Rani Randeep,Neetu Bhalla and Babbar Gill have given their melodious voices to songs of the film. The movie presents superlative acting performances and is highly emotional.