NewZNew (Chandigarh) : Arvind Sethi from Pune along with Sandeep Garg and Anuj Khera from Delhi NCR claimed the winner’s spots at the 15th annual edition of MercedesTrophy India National Final held at the par 72, 7020 yard Oxford Golf and Country Club in Pune. These winners will now go on to compete at the MercedesTrophy World Final at Stuttgart, Germany in October where they will compete against winners from 600 tournaments played in 60 countries across the world. 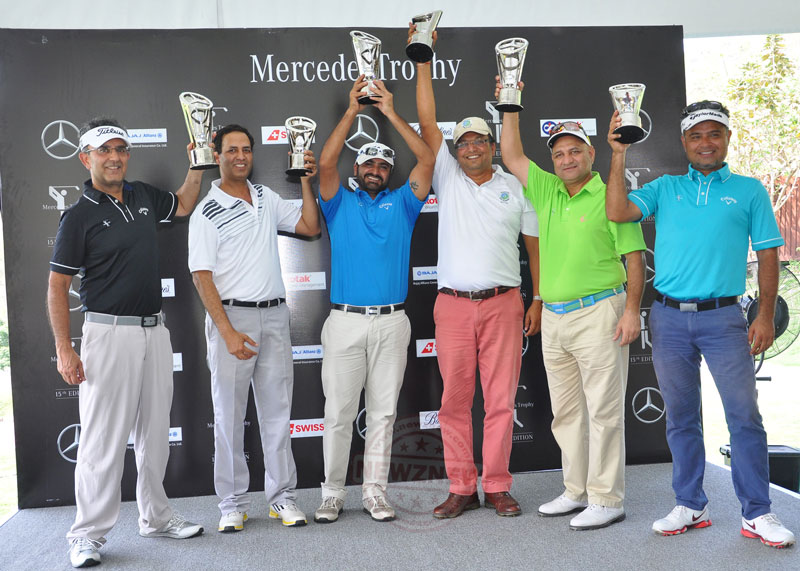 The MercedesTrophy National Final was played in a Stableford format across three handicap categories (0-11, 12-16 & 17-24). Playing in the 17-24 handicap category, Pune golfer Arvind Sethi (handicap 19) won his spot with a score of 41 points as he made nine pars to finish 6 points ahead of second placed Nitin Bhangey (35 points) from Pune.

“It was my first experience at a final of a national level competition like MercedesTrophy and I really enjoyed it. I played a very balanced round which made the results in my favour. Some of the Delhi golfers played very competitive golf and it shows in other category results. I am now looking forward to playing well in the MercedesTrophy World Final in Stuttgart.” said Arvind Sethi of Pune.

Anuj Khera (handicap 8), who qualified from Jaypee Greens GC in Delhi NCR, stitched together a delightful round comprising of three birdies and 12 pars which earned him a place in the World Final with a score of 42 points in the 0-11 handicap category. Joining him at the World Final will be another Jaypee Greens qualifier, Sandeep Garg (handicap 16) who won in the 12-16 handicap category as he scored 35 points with a steady round which included a birdie. Devang Shah (38 points) from Ahmedabad and Rajiv Mohindru (32 points) from Delhi were the runners up in 0-11 and 12-16 handicap categories, respectively.

“MercedesTrophy brings together the best of sports and luxury in perfect harmony. The 15thMercedes-Benz Trophy India Final saw some outstanding performances by the golfers, memorable experiences off the course, lots of enjoyment and worthy winners. Mercedes-Benz always strives to keep its promise to the Live the Best and extend the promise of experience to our guests and customers alike. We wish the very best to our winners who will represent India in Mercedes-Benz Trophy finals in Stuttgart.” said Eberhard Kern, MD and CEO of Mercedes-Benz India.

During the National Final, A Ramamurthy from Coimbatore was announced as the ‘Drive to the Major’- Straightest Drive contest winner, who  will travel to the British Open Championship at St Andrews, Scotland this July and could  win a round  on the championship course the day following the tournament.

The highly challenging Oxford GC posed a stern test for the contestants. In a hotly contested final round, 38 golfers from 24 qualifying rounds held at Bengaluru, Coimbatore, Chennai, Pune, Ahmedabad, Mumbai, Hyderabad, Jamshedpur, Jaipur, Bhubaneswar, Chandigarh, Kolkata, Delhi NCR and Lucknow, competed for the right to win the three coveted spots to the 26th edition of the MercedesTrophy World Final. Amongst the finalists were former World Cup winning cricketer Syed Kirmani and  industrialist Ratan Jindal, who inspired their 36 other competitors which gave a lift to the level of competition at the National Final.