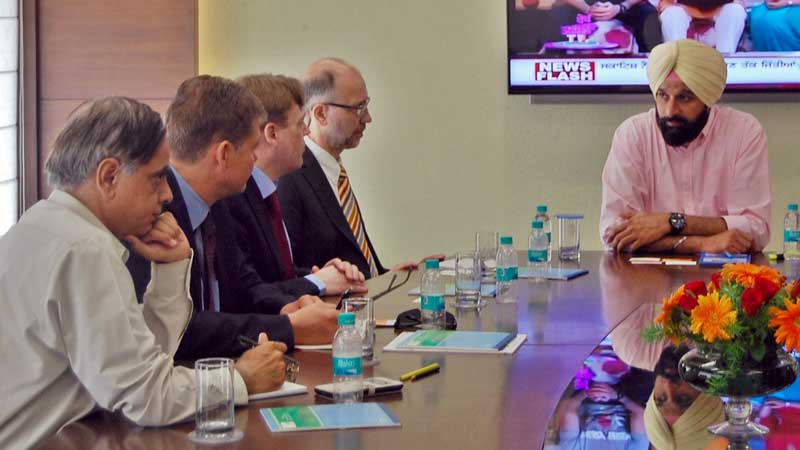 NewZNew (Chandigarh) : Punjab and Germany are all set to join hands for creating “Renewable Energy Equipment Hub” in the state as Indo German Energy Programme has proposed to facilitate linkage between Punjab and German Renewable energy sector. Punjab has also sought help from Germany to harness the huge potential available in rooftop solar and biomass power.

A Delegation of Indo German Energy Programme lead by its Director Dr. Winfried Damm today called on  Sh. Bikram Singh Majithia , New & Renewable Energy Minister , Punjab and Sh. Anirudh Tewari, Principal Secretary, Power & NRE  and made a presentation regarding the role of the forum and the efforts being put by them in facilitating technology transfer as well as investment by German companies in the RE Sector to India. Dr. Winfried Damm offered to facilitate linkage between Punjab & German RE Industry to create RE equipment hub in Punjab besides bringing in experienced German EPC companies to execute high standard RE project in the state.

Appreciating the initiative taken by the indo German Forum in facilitating Punjab  to bring in world class technology and expertise in the RE Sector in the state, Mr. Bikram Singh Majithia  assured the delegation that the State would extend all facilitation to German Industry. He pointed out that the state has an extremely investor friendly policy in place supported by a specific New & Renewable Energy Policy. Making a strong case of huge potential for investment available in state in rooftop solar & biomass power Mr. Majithia specifically requested the delegation to help Punjab in emerging state in these sectors as Germany had a strong presence and proven track record in both the sector.

Mr. Anirudh Tewari, Secretary, New & Renewable energy explained about the huge potential of around 1000 MW on the canal top and reservoir in the state. Dr. Amarpal Singh, CEO, PEDA was also present in the meeting.