Punjab has the potential to produce many more international cricketers: Players’ body: Around 50 former Punjab Ranji players, including Bhupinder Singh Sr and Rakesh Handa, from different parts of Punjab gathered today in Ludhiana to talk about the scenario of cricket in Punjab. 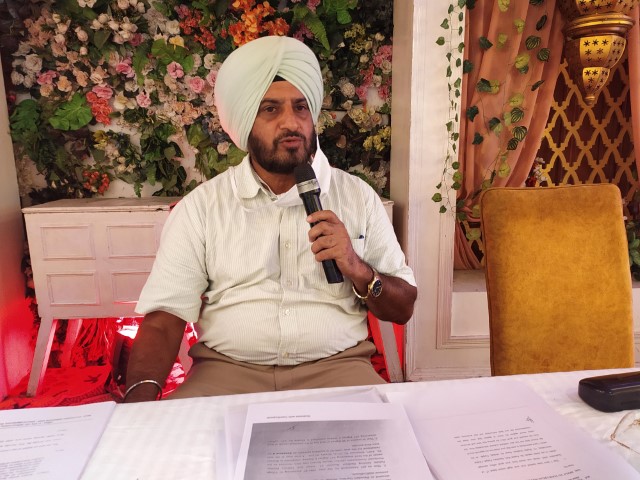 They met with the president of Punjab Cricket Association (PCA) and discussed about the welfare of all the players, how to strengthen minor districts and how to improve the conditions at the grassroot level. The players were unanimous in their view that the state has the potential to produce many more international cricketers if PCA is willing and earnest in their efforts.

Thereafter, at separate premises, the players aired their grievances regarding grave anomalies in functioning of the Punjab Cricket Association (PCA), which is the apex cricket body in the state.

They also handed over a copy of the official complaint that former Punjab player Rakesh Handa has lodged with DGP Punjab urging him to take suitable action.

According to the complaint, the people involved in the embezzlement are– MP Pandove (former Secretary and Treasurer of BCCI and former member of Punjab Public Service Commission, Patiala), RP Pandove (secretary of Patiala Cricket Association and presently engaged as director (administration), Punjab State Power Corporation Limited, Patiala) and GS Walia, a signatory.

At the relevant time, MP Pandove and GS Walia were in control of the affairs of PCA and they allegedly managed disbursement/transfer of funds in the name of Patiala Cricket Association by manipulating the records. The amount was illegally disbursed in favour of family trust of MP Pandove.

Also Read :   How Rehab Centers Are Helping Druggies To Get Rid Of Drug Addictions

PCA receives grants under various heads from BCCI to ensure that the same is spent for the betterment of the game of cricket in the state.The players alleged that instead of spending the funds on the improvement of the game, they were being illegally transferred to the family trust which was formed in1988 or prior.

Since 1988, the above mentioned persons have been embezzling funds to their family trust by misleading everyone and claiming it to be a registered society. As a result, they have accumulated over crores in the bank account.

Of this huge amount which belongs to the cricketers of Punjab, barely ₹1 or ₹2 lakh per year is given to other district cricket associations where children and budding sportspersons are eager to improve their game and desperately require funds for the same.The former players questioned that why all the funds are focussed on Patiala and Mohali (where GS Walia is at the helm of affairs), and not on other district associations in the state.

In the complaint, it has been mentioned that Patiala Cricket Association is in unlawful possession of the land owned by the government without paying any usage charges.

The players further alleged that balance sheet of Patiala District Cricket Association and Patiala Cricket Association were being manipulated and some accounts were hidden to avoid them from the public view. In this regard, Revenue Department of Punjab ordered the Deputy Commissioner Patiala in August 2020to investigate the matter and give a detailed report.

The players rued that the above mentioned persons have been bringing stagnancy to the game by not allowing elections in the districts. This way, the same people have occupied the office since a long timewhich hinders growth.

In this regard, the players’ body hailed the historic judgement pronounced by the Hon’ble High Court which has paved the way for elections to be held for the Ludhiana District Cricket Association under the direct supervision of a retired High Court judge.

Some former cricketers had filed a case in The Punjab Haryana High Court, Chandigarh against Ludhiana District Cricket Association for implementation of Justice Lodha Committee Recommendations. Since 25 years, no elections had been held in the Ludhiana District Cricket Association. The High Court pronounced that elections be conducted and that also under the supervision of a retired High Court Judge.

Urging the apex council of PCA headed by president to take action, the former Ranji players requested that the matter should be investigated and the responsible persons may be punished in accordance with the law.

In a separate case, a legal notice was issued by Rakesh Handa, former cricketer, for violating the order of the Supreme Court to Punjab Cricket Association, Mohali.

In the notice, Handa alleged that Puneet Bali, PCA secretary, was illegally nominated and appointed in 2017. Bali submitted incorrect information at the time of filing his nomination papers and claimed to be a ‘Representative’ from Ropar District Cricket Association, Roopnagar.

Also, the constitution of PCA mentioned that if someone from the district association participates, that person should be an office bearer for a minimum of three years. Hence, Bali was ineligible on conditions of both- Ropar District Cricket Association and PCA.

The players’ body were hopeful that suitable action will be taken and cricket and cricketers will regain its lost glory in the state.