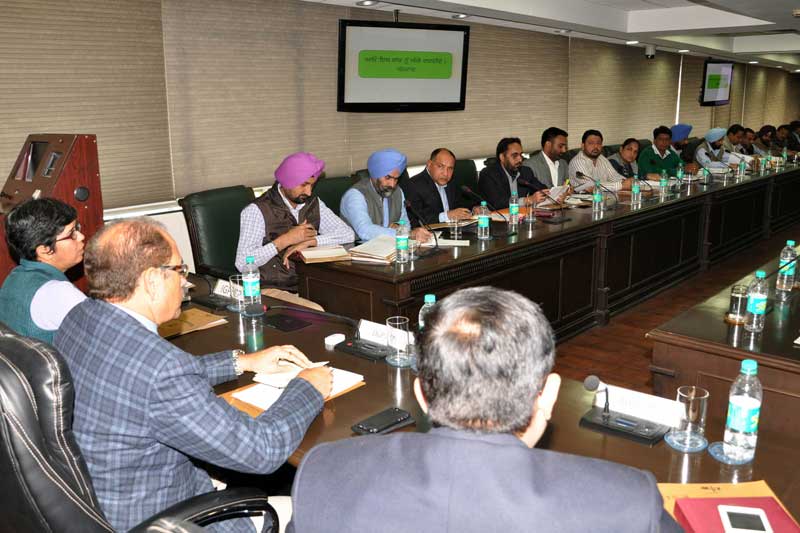 NewZnew (Chandigarh) : The Punjab Police has decided to take war against drugs to the peoples’ forum by involving the masses at village level in this campaign. It has constituted Advisory committees of local people including NGOs, intellectuals, social workers, professionals at every Saanjh Kendra operational in every police station of the state to make it a peoples’ movement. The committees would also focus on critical issues of women safety, traffic and presence of stray animals on roads to work out solutions at local level.

Presiding over a meeting of SP/Dy.SP ranked officers posted as District Community Police Officers here at the Punjab Police Headquarters Sh. S.K. Sharma, DGP/Community Policing stressed the need for greater engagement with the community. He informed that a recent step in this direction was taken by constituting Saanjh Advisory Boards through which more than 35,000 persons have been associated with the Saanjh Kendras. He said that a training module for members of Saanjh Committees and Saanjh Advisory Boards will be prepared soon to enable them to mobilize and involve more people with the Saanjh initiatives.

Emphasizing the role of Saanjh Kendras as centres providing time-bound and dignified access to police services, as a forum for dispute redressal and as a platform for police- community partnership, Sh. Sharma informed that over 40 lakh services have been delivered through the Saanjh Kendras and over 27,000 disputes resolved through the participation of members of community.

At the onset of meeting a presentation on ‘Saanjh’, the Community Policing initiative of the Punjab Government, was made in which the capabilities of the Saanjh Software that connects offices of Zonal IGs, Range DIGs, CP/SSsP, various Saanjh Kendras and the Community Policing Wing at Headquarters, as a tool for monitoring were highlighted.

The District Community Police Officers informed that the Saanjh Kendras, with the help of members of Saanjh Committees and experts from various fields, were conducting awareness campaigns about citizens’ rights, laws relating to crime against women and children, against drug abuse, traffic rules, etc. in schools, colleges and other public places etc.

Sh. S.K. Sharma, underlined the need to address the common concerns raised by the members of Saanjh Committees and Saanjh Advisory Boards in various districts viz issues concerning traffic, safety of women, problem of drug abuse and presence of stray animals on roads through inter-departmental co-ordination. The DGP/Community Policing urged the officers to devote their energies to strengthen ‘Saanjh’ between police and community which will not only ensure greater transparency and accountability and better citizen satisfaction but would also help in improving the image of police.

It may be mentioned here that Punjab was the first state in the country that had initiated the concept of Saanjh Kendras to provide civil services of police in corporate environ and made police accountable by state of art software. This experiment has been expanded by involving general public in it.

POSHAN MAAH is being celebrated from 1st to 30th September