Musical film ‘Paani Ch Madhaani’ brings back the Punjabi Retro Style of 1980s: Punjabi music has been cutting across boundaries, its presence is unavoidable and its impact on youth and the Hindi film industry needs no proof. To preserve this legacy, the upcoming movie ‘Paani Ch Madhaani’ will hit the theatres on 5th November 2021. 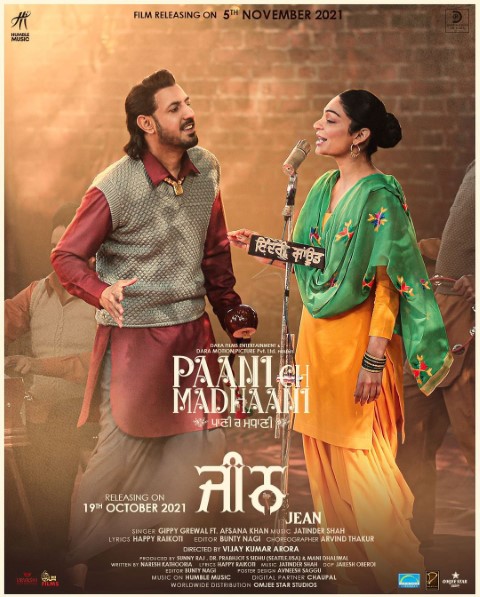 The movie is set in the era of the 1980s, when people enjoyed listening to singers like Chamkila, Kuldip Manak and other very renowned singers.

Since the movie is based on music, you will enjoy six different songs only on Humble Music, picturised on Gippy Grewal and Neeru Bajwa who themselves will be portrayed as singers in the film. It is a very big task and a huge responsibility for a film director and of course the music composer to make the film sync into the music and vice-versa.

The music has been directed by one of the popular and talented music composers, Jatinder Shah. Gippy Grewal and Shah Ji have been working together for at least fourteen years now, maybe which is the reason he had so much faith in Shah Ji and gave him this impeccable project. Shah Ji feels so blessed and fortunate to have the chance to do this project as he says,” we have grown up listening to folk music so it helped us to create every inch of the music with the same style and pattern”.

As we see the trailer of the film and listen to the music, we can easily make out that the music is made with a lot of effort and hard work. The songs have been beautifully sung by our favourite singers Gippy Grewal, Afsaana Khan, Ranjit Bawa and Jasbir Jassi. It will be for the first time that we are going to have them all singing on the same album as a team and surely amuse the audience.

Shah Ji further adds,” The song that is going to be released today has a very difficult pattern of rhythms made after 40 years using classical musical instruments, whose names might have not even been heard by most of the people. As digital music changes at a fast pace nowadays, it is important to create this kind of film so that our legacy remains alive.”

The songs for the movie are written by our very own treasured writer Happy Raikoti, as we all know how he pens down his heart out, but this was a very difficult and yet a different task for him as he has never written songs for a period film. We have always been overjoyed by his depth of words and the kind of songs he writes but this time we will be surprised by his work.

So, let’s get ready with our dancing shoes on to twirl on the tunes of ‘Paani Ch Madhaani’ as the first song of the film releases today ‘JEAN’ under the label Humble Music sung by Gippy Grewal

Lakshya celebrates its best ever results In the Annual Valedictory Function