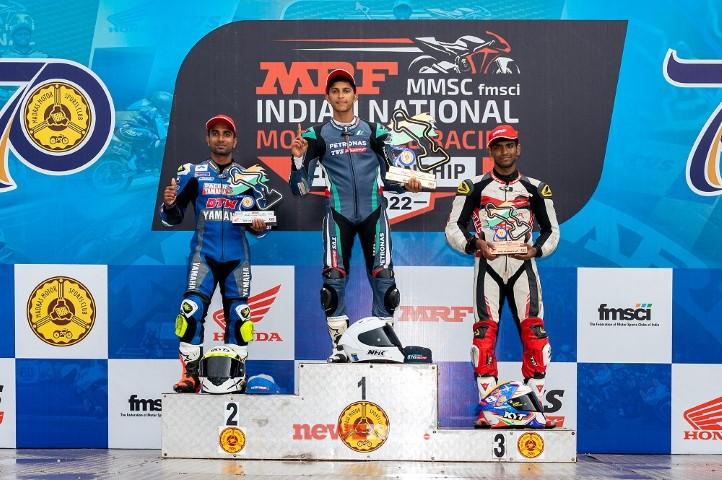 Speaking on round 2, Mr. Prabhu Nagaraj – Operating Officer, Brand & Communication, Honda Motorcycle & Scooter India. said, “We are happy to see the dedication and determination with which our riders performed on the racetrack. In a thrilling battle to the photo finish, Rajiv Sethu never backed down and used his years of riding experience to manoeuvre through the competition. He successfully bagged another podium for the team in the PS165cc category. On the other hand, our young guns continued to showcase their exceptional skills. Both Sarthak Chavan and Raheesh Khatri of the IDEMITSU Honda India Talent Cup NSF250R and CBR150R categories scored double wins this weekend stamping their dominance on leader board. I’m happy that all the Talent cup riders improved under the able guidance of Mr. Tadayuki Okada”

The IDEMITSU Honda SK69 racing team’s experienced rider Rajiv Sethu displayed aggressive spirit by bagging another podium in the photo-finish race 2 of PS165cc of national championship. Despite his first position start in today’s race, Rajiv got pushed back to 5th ending first lap itself. The rider quickly responded back and moved to 3rd in lap 5. From thereon, he continued to make the best use of his strategies and finished third with total time of 15:55.726 – a mere difference of 0.048 seconds from the race leader. Rajiv’s teammate Senthil Kumar finished the race at seventh. Whereas, Abhishek V of ASK Honda Racing team once again closed the race at fifth.

The young lads of IDEMITSU Honda India Talent Cup once again proved their mettle on the Madras Motor Race Track in Chennai and improved their performances with valuable inputs from their expert coach Mr. Tadayuki Okada (an ex-MotoGP rider).

It was a clean sweep for championship leader Sarthak Chavan as he sealed a double win for the weekend at the end of IDEMITSU Honda India Talent Cup NSF250R Race 2. The 16-year-old international rider overpowered others with a massive lead of 10 seconds. In an interesting battle for the 2nd spot between Malappuram’s Mohsin P and local boy Shyam Sundar, a clean manoeuvre by Mohsin in the last lap confirmed his place on 2nd (total time 18:55.514). Shyam Sundar lapped back at 3rd clocking total time of 18:55.663 – merely 0.049 seconds behind Mohsin.

In today’s race of IDEMITSU Honda India Talent Cup CBR150R, Mumbai’s Raheesh Khatri was in a league of his own throughout the six-laps. The 14-year-old rider started from pole position, created mammoth lead of 32 seconds and comfortably won his 4th race with total time of 12:54.900. Making a quick start in the race was Kolhapur’s Siddesh Sawant who while running a close second, came into the inside at Turn 10 of Lap 1, lost his front end and crashed out taking along Rajender Beedani with him. The battle for P2 and P3 was then fought between Chennai’s Shyam Babu and Bengaluru’s Harshith Bogar who kept exchanging their places until a small error by Harshith in lap 5 confirmed Shyam’s position at second. Harshith Bogar rounded up the podium at third with total time of 13:27.429.

The clean race of Honda Hornet 2.0 One Make Support race saw two raging battles – one to claim the victory and the other one to stay in contention for the podium at P3. Starting today’s race from P2, the local boy G Balaji quickly moved to P1 and stretched his lead to chequered line, finishing the race at 13:32.239. With just 0.139 seconds behind the race leader, pole starter Kayan Zubin Patel finished the race at second. The Mumbai lad recorded best lap of 2:14.112. The fight for 3rd place on podium between Romario and Sudheer Sudhakar continued till last lap. While Romario completed the podium on third, Sudheer Sudhakar settled for fourth place after starting from 7th on grid.

Enjoy Dining under the sky at “AL FRESCO AREA” at JW...