newznew (Chandigarh) : From Star Plus and the writer of Bahubali & Bahubali2, K. V. Vijayendra Prasad, comes this magnum opus show, the story of which narrates the clash of two civilizations born and built out of two different existential needs; one desperately wanting what the other had and the other fighting to defend what they believed to be rightfully theirs. 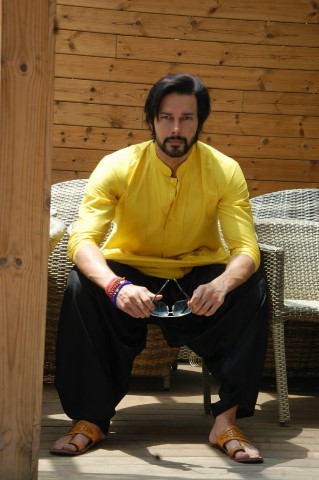 The story goes back to the time when the Dravidians ruled over the Indian subcontinent and the Aryans, the nomads from the west, were in search of Sapt sindhu, the fertile land they had always heard about.  The Dravidians had it all from fertile land to a flourishing civilization, while the Aryans were still in search of the land where their clan could settle down and flourish.

Rajniesh Duggall, who will be seen as Varun dev, visited Chandigarh to take his fans to the unknown world of the Aryans, a civilization which was given nothing on a platter. They found themselves born and struggling for survival in difficult terrains. They had a hunger which made them go hunting, adventuring, and conquering. The young Aryan civilization was looking for a land where, all that they struggled for was available – food, water, pleasant weather and a land that was fertile throughout the year. They found it as well, but it was somebody else’s. However, that never deterred anybody in history from going for it. And that’s the reason they came looking for the Aryavarta and made their final push to conquer it.

On the other side, the Dravidians were the lucky ones. They were born in a land which had all that was needed to survive. They had what their Gods ordained for them. They built a great civilization. And a strict society because they did not want to lose all that they had.

Born in such an era, Varun dev has grown to be an Aryan warrior who will become the epitome of all that was admirable about Aryans. He believes in the tenets of Aryan culture – of compassion to the needy and the weak. He is loyal to his clan. Inevitably, the best warrior in his battalion on whom his commander depends – both for his judgment as well as his abilities.

Devsena played by Karthika Nair, was the heir apparent and an unparalleled warrior, born in matriarchal society will be seen heading the Dravidian clan to defend it from the ambush of the Aryans, who in search of Sapt Sindhu were willing to leave no stone unturned. It is on the battlefield that she encounters an admirable warrior from the Aryan clan, Varundev who through his endurance has risen up the ranks in a democratic society. This battle marks the beginning of not just the biggest conflict there once was between these two civilizations but also unfurls the story of two warriors who are fighting from opposite sides unaware of the fact that destiny has something else planned for them. This roller coaster ride of a show will transport the viewer to a mystical era where nothing is what it seems.

Sharing an insight into Varundev, Rajniesh said, “I am in awe of the character personally. Varundev is an Aryan warrior who will be seen rising up the ranks through his endeavor and would be leading his clan towards a better future.”He added about his experience in the city, “I love this place, the good vive, infrastructure, culture and food keep bringing me back here. You can never get enough of Chandigarh and I am definitely looking forward to getting my familyto visit the city very soon”

Commenting on the project, writer Vijayendra Prasad said, “This is a creation of a parallel world of heroism. My story of Varundev brings to the forefront an Aryan warrior. He is strong and intuitive. This is the only project which has brought me to television.”

This high-octane, finite series also marks the debut of Tanuja Mukerji on television as Hahuma, the spiritual leader of Dravidians, who is beyond time and is seen prophesying the future of Dravidians as well as Aryans.

Aarambh, which is a complete work of fiction, is driven by all the variants of the human emotions’ spectrum – love, jealousy, pride, hatred, greed and all the other shades in between and therefore, is set to keep the audiences intrigued and wanting to see more.

New Punjabi comedy film ‘Me and Mr. Canadian’ releasing on May...